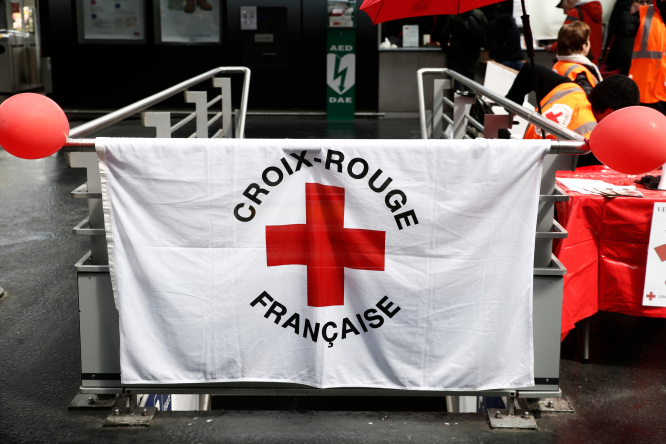 A Connexion reader has spoken about the sense of community and fulfilment she has experienced through joining the French Red Cross.

The Croix-Rouge française was founded in 1864, one year after the International Committee of the Red Cross was established in Geneva with the aim of protecting the victims of armed conflicts across the world.

Helen Beaney, who lives near Tulle in Corrèze and has been in France for 30 years, joined the Red Cross when she retired five years ago.

“I thought it would be nice to help out in some way,” she told The Connexion. “I was not sure what that would entail, but although there is no Red Cross shop in our small market town, surprisingly there is a small group.

“What do we do? Well, all those containers for donated clothes? We sort the[m]. The volunteers standing with a trolley at the supermarket, asking for grocery [donations]? That’s us!

“I imagine people think that the Red Cross is like the St John’s Ambulance, and that you would need medical training, but what we mostly do here is provide a tea party for old folks every few months, normally before Christmas, and at Mardi Gras and Easter.

“We just go along and decorate the hall a bit, lay tables, serve food and coffee, but also sit down and join in. There is an accordionist and they all know the old French songs.

However, “Most of what I did became impossible under the pandemic, partly because too many of the volunteers are elderly.

“We also man a stall at the local fête and hold a brocante once a year, as well as sorting donated clothes and collecting food donations. For example, this weekend we are collecting for the Banques Alimentaires [food bank network]. In larger towns we also provide breakfast for people who need it.

“I have been amazed at the benefits [being part of the Red Cross] has brought me: getting to know local people who, as you can imagine, are lovely, being part of the local grapevine, the camaraderie, the laughs.

“The huge spin-off is getting to know the nicest local people in your town, being able to put across the British point of view, improving your French (although you don’t need good French to do this) and what the Americans call ‘networking’!

“We have a Renault Espace, and if I go to a meeting, I can take six more people, which is much appreciated. They all wanted to know what we thought of Brexit, and I feel we give them an insight into what makes us tick, why we moved here and how things are across the Channel.

“I have been here over 30 years and have worked here, but this has pulled me into the local community and, for example, when our GP retired recently, I learned on the grapevine who was the new young doctor, and put our names on that list.

“My French is good, but I come away from, say, sorting clothes with other ladies, with my head buzzing with idiomatic phrases, and some local gossip too!

“Inevitably, most volunteers are retired, and as they age we really need more helpers, and younger ones in early retirement can offer a lot.

“There are other ways in which you can help which are outside my experience, but our English language skills can come in useful too.

“You will be doing yourself a favour too, so give it a go!”

Those wishing to get involved with the French Red Cross can do so via the organisation website, where they can search for the different programmes being carried out in their local area.

There are various missions needing volunteers, who can commit themselves to anything from a couple of hours a month to a few regular hours per week.

If you find something with which you would like to get involved you can send a message with your contact details to your local Croix-Rouge branch and offer your services.

Who still has to pay the taxe d’habitation in France in 2022?
22 January 2022
More from Your News
More from Connexion
Get news, views and information from France
Join the newsletter
Subscribe to The Connexion