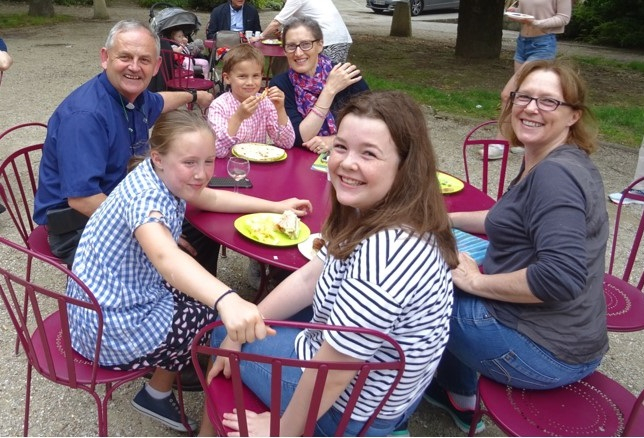 Services take place every Sunday in the Chapelle Saint-Patrick, Rue des Irlandais, near to the Jardin du Luxembourg, (irishchaplaincyparis.fr) followed by coffee and chat.

Priest Father Hugh (above, with some parishioners) says all are welcome.

The other English-language church is the Anglophone Chaplaincy of Saint Joseph’s, and the two churches work closely together.

St Joseph’s (stjoeparis.org) is in the north west of the capital, and has parishioners from more than 40 countries who are more comfortable attending services in English.

Father Hugh said many parishioners regularly attend Mass in their local French churches, but sometimes like to hear a service in English and meet other Irish people.

He said: “We have people who come from all over Paris and the Ile-de-France.

“Some are here for work, some are married to a French partner and have lived here for years, raising a family, some are from the rugby world, and some work in hospitality, so they have very varied backgrounds. They enjoy spending time on Sunday together, and it is a chance for families to get to know each other.”

Father Hugh has been in Paris for 18 months and is enjoying being part of the strong links between Ireland and France.

Irish priests have been present in this part of the city for hundreds of years, he said.

The Chapelle Saint-Patrick is in the ancient Collège des Irlandais building. Originally, it was used as a seminary for training Catholic priests when their religion was outlawed in Britain and Ireland in the 16th, 17th and 18th centuries.

It continued as a seminary until World War Two.

Then it was rented to the Polish Catholic church until 1997 to cover the period when Catholicism was forbidden in their country.

The building was restored and reopened in 2002 to house the chaplaincy and the Centre Culturel Irlandais, Ireland’s flagship cultural centre in Europe.