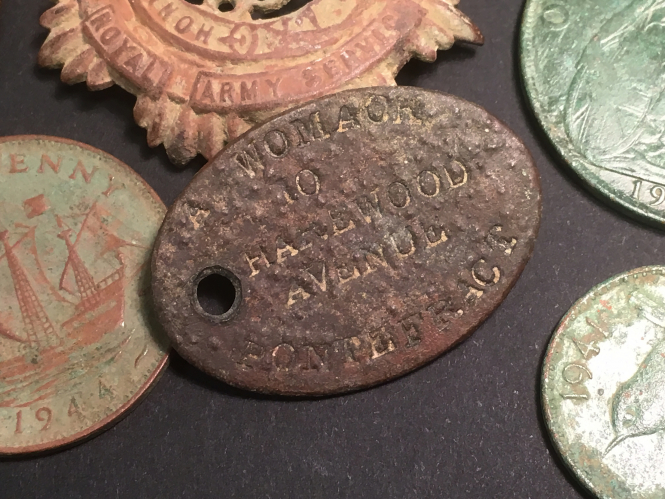 A 70-year-old find from the battlegrounds of Normandy has been returned to the family of its original soldier owner in the UK after a remarkable piece of detective work.

Matthieu Bonamy from Sommervieu, Calvados, loves to go out with his metal detector in search of little pieces of history on the local beaches and fields. In 2014, he came across an identification plaque with a name and address from Pontefract, Yorkshire. Intrigued, he began to search for its owner.

The name, A Womack, eventually took him to a newspaper article about a woman who was part of an association which helped old soldiers. He contacted the writer, Chris Woffenden, via Facebook, but there was no reply for some time.

Mr Woffenden told Connexion the rest of the story: “Incredibly, one day my phone fell on the floor and for some reason scrolled on to a message I had received two years earlier, but had not seen until then.

“I have been fascinated by World War Two since I was a child, so imagine my surprise when I noticed this message relating to a find on a battlefield belonging to a family member.

“I immediately contacted Matthieu Bonamy.  The plaque turned out to belong to my Uncle Arthur who was stationed at the munitions dump at Creully just after D-Day with the 67th Company of the Pioneer Corps.

“Soldiers were not allowed to carry anything with their address on it in case they were taken prisoner and I have often wondered whether he lost the plaque or whether he dropped it deliberately to get rid of it. I think it must have been for his house keys, but we will never know.  I had already traced some of his story during the war and visited Normandy several times, so it was just fantastic that this find should come back to me.”

Mr Bonamy sent the plaque to Mr Woffenden with coins, buttons and a cap badge he had also found in the area. He says metal detectorists often have a bad name and wishes the regulations in France were the same as in the UK where he says the finder can share the reward with the land owner: “It was very moving to have been able to trace the owner. What I love is to find something and know that the last person who touched it did so more than 60 or 70 years ago and it brings you close to history.”