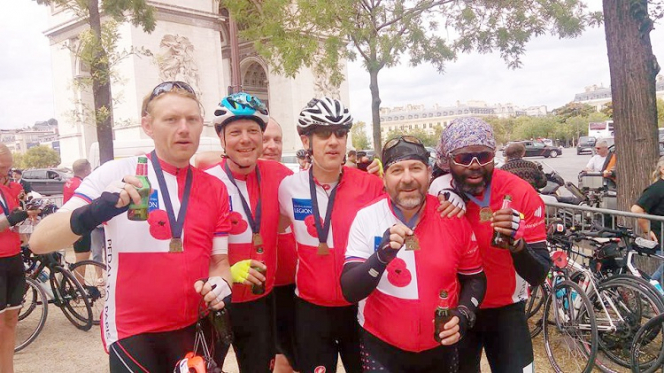 One is a talk by children’s author Michael Morpurgo on October 3 about his book Poppy Field, which tells the story of the poppy emblem.

It is a new step by the branch (rblfrance.org/index_paris.htm) which was created about a fortnight before the UK British Legion was itself founded.

It helped ex-servicemen still in France after the First World War as many hit hard times.

Today’s branch chairman, David Bean, said Paris, as in all branches, aims “to help ex-service people and their families when they are wounded or die, or for any other difficulty they may face, such as financial hardship; but also to take part in commemorative events.”

Every August 4 members are present at the Tomb of the Unknown Soldier at the Arc de Triomphe for the ceremony of the rekindling of the flame.

In September they welcomed 250 cyclists who raised money for the RBL in the Pedal to Paris Poppy Appeal event.

A mini-commemorative festival of Remembrance for children in November has plenty of poppies and readings of the poems some have written.

The British and Com­mon­wealth Memorial Service on November 11 at Notre Dame will be poignant as it marks the centenary of the end of the First World War. Five Chelsea Pensioners will be present.

Mr Bean said the British presence at memorials was important in France: “Both nations were involved and the French remember it perhaps more than we do. They like and appreciate it when the British get involved.”

The poppy appeal is the main fundraiser including the coffee morning at the Paris residence of the British Ambassador and the sale of the Paris Book of forces members’ experiences.

Publicity officer Caroline Clopet is working to involve younger people and children: “A school project will educate pupils of all ages about the two World Wars. First it was aimed at International Schools but other French schools have been using our material.

“Michael Morpurgo’s visit will help get young people involved and to modernise our image.”