Neil will be in the saddle for 24 hours 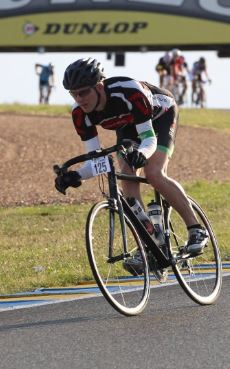 Mr Moss, who lives near Olonzac in Hérault, will be 47 when he starts the race in August, and is already into a rigorous training programme. He goes out on his bike at least three times a week and this month will be working on stamina cycling in the mountains. Next month, he improves speed and strength by pedalling among the vines.

2017 will be the ninth edition of the Le Mans 24 Hour cycling race – like the car and motorbike endurance events – and it is his second attempt.

Riders for the August 26-27 event can enter as soloists or relay teams and simply do continual laps of the race track.

In 2016 the solo winner, Evens Stievenart completed 204 laps, a total of 853km, and Mr Moss says he does not aim to be fastest or first, just to go as far as he can: “I was a keen cyclist in the UK but never did anything like this.
“When we moved here just over three years ago my wife, Joan, bought me a cycling magazine from the newsagents to practise my French. On the second page was an article about the Le Mans race and it inspired me to enter. We were building a house and things didn’t go to plan so I ended up doing DIY up to two days before the race in 2015.
“I didn’t do as much training as I had wanted, but I managed 123 laps, making 320 miles.
“It was very hot and there was a huge thunderstorm but it was one of the most enjoyable things I’ve done on a bike.
“There were times when I was on my own, in the dark with a setting half-moon ahead and the wind behind, riding a silent bike on a perfect road. At other times I chatted to fellow cyclists or admired them as they passed at speed.”

He chose Macmillan (www.macmillan.org.uk) as there has been cancer in his family: “They give advice and help those with the illness. I would like to raise over £1,000.”
Doing it for charity inspires him to train, even on the coldest day: “I can’t back out now. I’ve got to keep on going. Encouragement helps so if anybody sees me out and about in the Minervois, give me a wave.
“Also comments on my Just Giving page (www.justgiving.com/fundraising/nemo-velo- solo) to spur me on will be very welcome and all donations give me a boost. I want to ride long-distance events wherever I can because no-one should face cancer alone.”