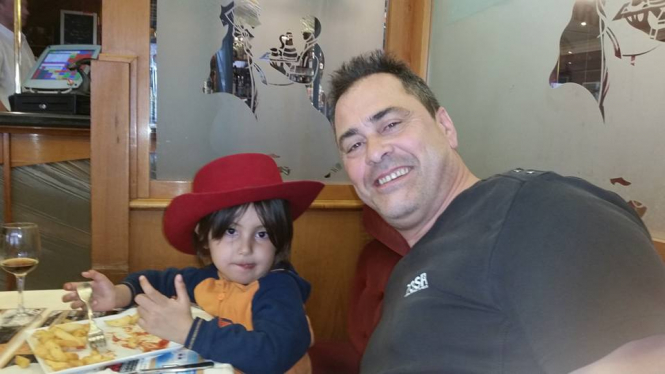 Rob Lawrie and Bahar Ahmadi, the young Afghan girl he was asked to smuggle out of the Calais refugee camp
By

The 49-year-old former soldier from Leeds was arrested for people smuggling and, although facing five years’ jail, was freed by the French court with a €1,000 suspended fine after the charge was reduced to that of endangering a child.

Regularly driving vans of aid to the refugees, he was nicknamed ‘Mr Rob’ by the children and is now an aid worker and an outspoken advocate for refugees.

He hopes to raise £2,000 with his run to help the St John of Jerusalem Eye Hospital Group, the only charity providing sight-saving medical care in the West Bank, Gaza and East Jerusalem to adults and children regardless of ethnicity, religion, or ability to pay. The charity also works across the West Bank.

Sponsors can use the Virgin Moneygiving site here.

Mr Lawrie is planning other fundraising initiatives this year such as cycling from Leeds to the Eiffel Tower in June to raise £10,000 for child refugees. He wants to do as much as possible to end the conditions child migrants face and said: “The problem of child refugees living like they do isn’t going to go away. While politicians discuss, refugees freeze and die.”

We will publish the link to his sponsorship page for this when it is available – and you can keep up to date with him on Facebook here.

The Connexion spoke to Rob Lawrie in the November 2016 issue where he revealed what sparked his bid to smuggle the girl to the UK.