Say hello to Phill and Emily on their Mersey-Med trek 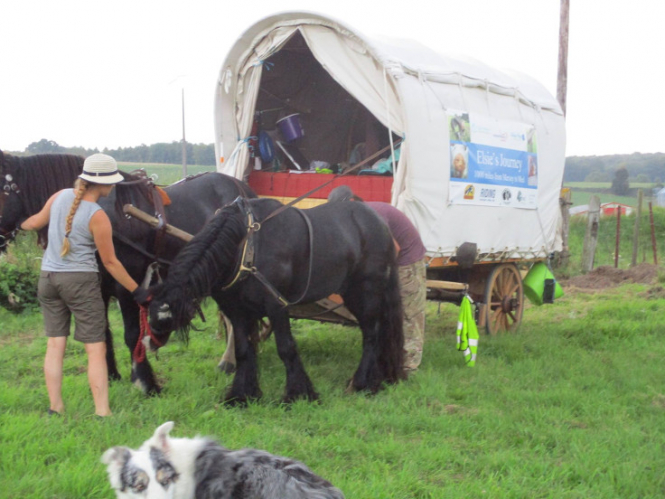 A couple have arrived in France on an epic memorial journey that will take them from Merseyside to the Med – by horse-drawn covered wagon.

Phill and Emily Gregson are doing the 1,000mile trip in memory of their daughter Elsie, who died at one month old from a rare disease called Mitochondrial Disease in hospital in Liverpool, last November.

Stopping overnight where they can at the roadside or where people help out with a spot for a stopover, they are in Pas-de-Calais at the moment – hiding from the rain in a field at Cavron St Martin (62140) – resting before heading on to Frévent.

Phill, who is a master wheelwright, and veterinary surgeon Emily have travelled the world by conventional means but now aim to make a legacy in Elsie’s name by raising funds for charity on their route over the backroads of France.

Aiming first for Frévent, west of Arras, they will continue to Compiègne and bypass Paris to the east and aim for Guédelon castle in Yonne to the south-east – where artisans are recreating a medieval castle – and then down the Rhône to the Gorges de l’Archèche, the Camargue and the Mediterranean.

They are hoping for help or a safe field with grass and water from anyone who sees them on the way and are also raising money for charity, with funds from their JustGiving page going to Alder Hey, Claire House Children's Hospice and Liverpool Women's Hospital.

The wagon they are using was built by Phill based on basic continental, British and American styles of construction and is light enough to be pulled by one of their pair of cobs, Bear and Killarney, with the other getting a rest.

Get more information on their journey on Facebook/Elsiesjourney and on Phill’s WorldwideWheelwright website.