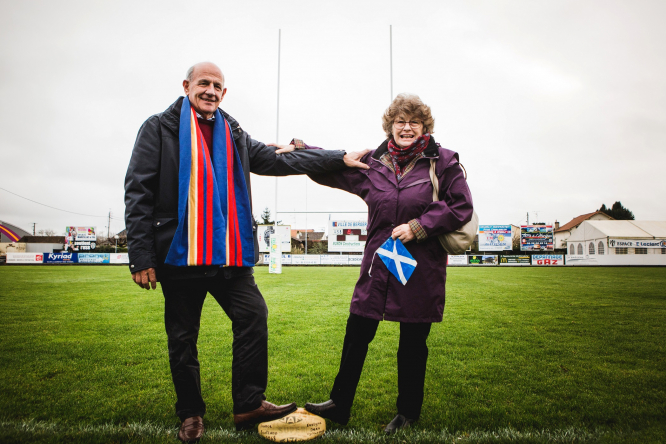 February's Six Nations match between Scotland and France at Murrayfield will be very special for one Franco-Scottish couple, who will mark the 50th anniversary of the day they met at the venue as guests of the Scottish Rugby union, thanks to the initiative of their 11-year-old granddaughter.

Jean and Evelyn Bernardi, who now live in Bergerac, met by chance on the day of the same match in 1968 - a game France won 6-8. Mr Bernardi said: "On January 13,1968, I, a young Bergerac railwayman, and friends went to see Scotland-France at Murrayfield.

"There, in the stands, I met a young and charming Scottish girl, a student at the Edinburgh School of Fine Arts: she was attending a rugby match, accompanied by a group of student friends, for the first time in her life."

The couple married the following year, and now have two grown-up sons, who have children of their own.

Mr Bernardi said one of his grandchildren, 11-year-old Nina, wanted to know how he and his wife had met: "She thought it was "cool" - and having said that in 2018 it would be 50 years since we had met, she concluded Evelyn and I ought to go back together to Murrayfield," he said.

"When her mother told us Nina had written to Scotland and had received a phone call... I was only half surprised and very amused."

There will be little rivalry in the stands between these particular two supporters. Lifelong rugby fan Mr Bernardi, who was a regular at Twickenham when the family lived in London, said: For many many years I have said, 'I support the team which plays the best rugby' - and it certainly is not France nowadays!

"On the other hand, Evelyn, who has only been to two rugby games in her whole life - Scotland-France in 1968 and France-Scotland in Paris in 1969 - is a staunch and unwavering supporter of Scotland!"

Mr Bernardi's career took the family all over Europe - from Stockholm, to Scotland and England - before the couple headed to Bergerac in 2010. Their eldest son, Pierre, was born in Scotland and has described himself as "50% Scottish - 50% French". Their second son, Jean-Luc was born while the couple lived near London, and thinks of himself as "100% English".

"I remember clearly when Pierre was about nine or 10, and Jean-Luc five or six, coming into the lounge on a Saturday afternoon: on TV England were playing Scotland. Pierre was going, "Go on Scotland, Go on Scotland"... and next to him, a quieter younger voice was saying "Come on England, come on England"," Mr Bernardi said.

A return to France was not on the cards, Mr Bernardi said, until he paid his mother and sister a visit in 2006, and spotted a property for sale.

After weighing up the pros and cons of France and Scotland, where they lived at the time, Mr Bernardi said that he "applied French democracy", and told his family, "You can stay in Scotland if you wish, but I am moving to Bergerac."

It has not all been plain sailing since the move, but the couple are still happily living in the Dordogne. Artist Mrs Bernardi makes the most of the warm weather and pleasing natural light to paint outside. Later this year, she will exhibit her work at the India Institute in London, along with New Delhi-based ceramic artist Manju Sinha.

rugby
family
More from Your News
More from Connexion