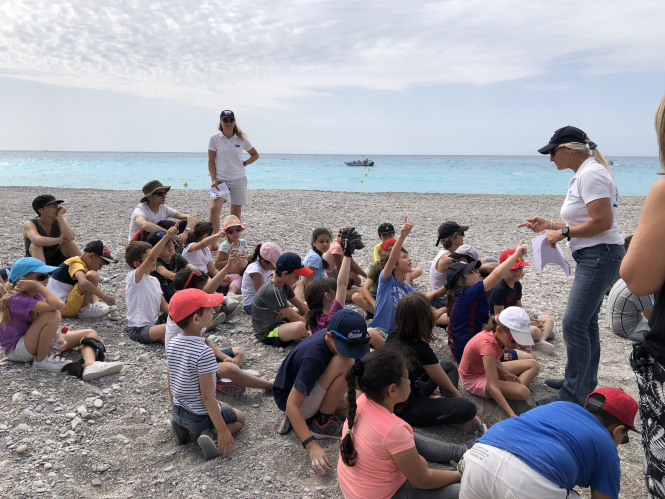 Hitting the beaches is taking on a whole new meaning this summer.

The Animal Fund (TAF) association is organising a series of clean-up events as it fights against the overfishing of whales and dolphins and their captivity in marine parks, and campaigns against plastic use because of the damage it inflicts on sea life.

The Monaco-based charity was set up three years ago and has members worldwide.

One of its main thrusts is education – going into schools, holding events and giving presentations.

On Ocean Day in June, five school classes helped clean up the Nice beaches and more events are planned throughout the summer.

TAF was founded by Berit Legrand, a Dane who has lived by the Mediterranean in Monaco for 20 years.

Mrs Legrand, a former stockbroker and Pilates instructor as well as a champion water-skier, said she wanted to do something to make the world a better place. She looks out over the sea every day and cannot understand why anyone would want to do anything to destroy it.

“Wherever I go, I try to get the message across that the big mammals in the sea must be looked after,” she said. “More than 50% of our oxygen comes from the ocean and whales are the biggest contributors [their iron rich faeces provides vital nutrients for the millions of phytoplankton in the ocean which convert CO2 to oxygen via photosynthesis].

“We cannot live without these magnificent creatures.

“That means we have to look after the environment they live in. One of the most direct actions we can take is to stop using plastic.”

TAF tries to do this in a fun way and has created 10 games to promote a plastic-free lifestyle.

It has developed a stainless steel water bottle and hopes to start selling a chemical-free natural sunscreen soon.

Events this year have included a Whalethon, headed by world marathon record holder Paula Radcliffe, where 400 people took part in a run/walk by the beach.
Members pay €25 for one year, €50 for two or €100 for four.