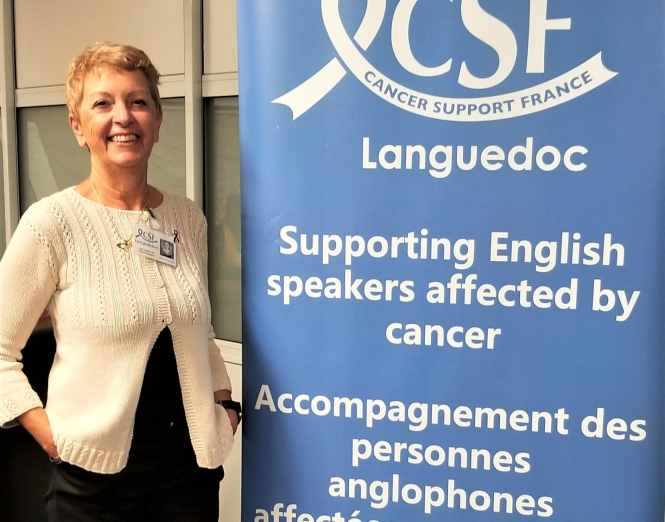 A volunteer with a charity that helps English-speaking cancer patients and their friends and families throughout France has been awarded the British Empire Medal Award in the New Year Honours List.

Catherine Hartley was nominated for the award by fellow volunteers and clients and their families from Cancer Support France Languedoc (CSFL), as well as a senior oncologist at the Institut du Cancer de Montpellier hospital.

Mrs Hartley, from Le Bosc, Languedoc - who is French, has an English husband and worked in the UK for over 35 years before returning to retire in France in 2007 - helped set up CSFL in 2009, became President early in 2010 and held the position for five years. She has also contributed to the wider Cancer Support France (CSF) network, and in particular helped draft the National training curriculum for both trainers and volunteers across France.

Mrs Hartley said she was surprised to be given the award: “It was an absolute shock. I feel very humbled by it. I know so many volunteers who work so hard, that I feel it is a recognition of the work done by all the volunteers and friends of Cancer Support France, both locally in the Languedoc and across France.”

The charity helps by assigning those touched by cancer with trained, active listeners to offer linguistic and practical help, information and emotional support.

The first CSF branch was set up in Poitou Charente in 2002 by Linda Shepherd who, following her own experience with cancer in France, realised the need for emotional and practical support for English speakers. There are now 17 local associations supported by a CSF National association.

Mrs Hartley said she is very proud to be part of CSF: “There is something special about it, which goes beyond the immediate help given to clients and brings the whole community together.

“CSF is a robust and professional organisation, and I am glad that the work it is doing in France has been recognised by a British award, which is a reminder that there is a strong British community in France where people are working together to help each other. That is a good thing at this time.”

She already had experience helping those affected by cancer when she arrived in France and quickly realised how difficult cancer situations could be for Britons here, especially those unfamiliar with the French medical system and whose language skills were limited.

In the UK she worked for several years in retailing, before retraining in complementary medicine. She gained several ITEC diplomas and set up a successful practice in London.

In 2003, she supported one of her friends through terminal cancer. For the next four years she volunteered as a therapist, in particular with the North London Cherry Lodge Cancer Care centre.

When she moved to France she offered holiday respite care in her new home for Cherry Lodge cancer patients and their families for three years, during which time she had become heavily involved in CSFL.

The award will be presented to her by the British Ambassador to France at the Embassy in Paris.