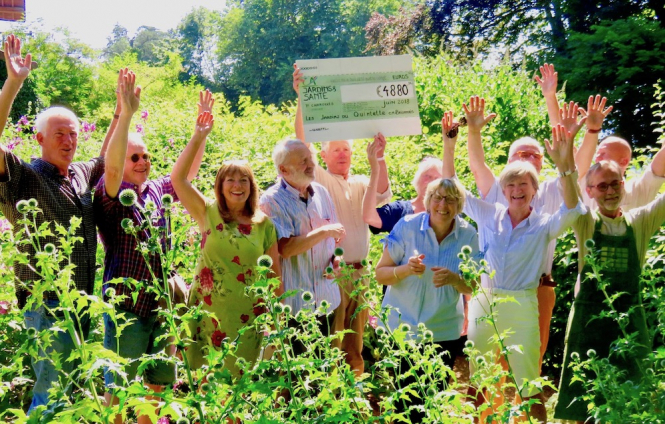 Five pairs of green-fingered gardeners on the border of Saône et Loire and Rhône departments handed over a cheque for nearly €5,000 to charity at the weekend.

The money was raised on a single day in June, when the group - known as Le Quintette - opened their five gardens for their second charity open day in as many years, and welcomed 980 visitors.

Peter and Lyn Steven were one of the couples involved in the event, which raised €4880.80 for the Jardins et Sante association. She said: "We're very pleased. It's double what we made last year and the number of visits between the five gardens was nearly a thousand, which is absolutely incredible in a small area like this. It's amazing."

Mrs Steven is not the only one to be impressed. In a letter to the group, the national President of the charity, Anne Chahine, said the amount raised was far higher than any of the most optimistic expectations.

Mrs Chahine said that she wanted to express her gratitude to the group who opened up their gardens to help people in hospital or long-term care benefit from "a pleasant place where all their senses will be stimulated and where they can find soothing non-medicinal care".

Jardins et Santé, which has been linked to the National Gardens Scheme since 2004, will use the money to for garden projects in 11 hospitals and social medical establishments for patients with brain diseases.

In total, the association has created 60 gardens at hospitals across France.

All the members of Le Quintette have already decided to repeat the event in 2019, and hope to find more like-minded gardeners in the area to boost their fundraising abilities for what Mrs Steven described as "a very good charity that helps many, many people".

The multinational gardeners live in close proximity. "Two or three gardens in the same commune, about 5km from us," Mrs Steven said. "And the other garden that was open is in the Beaujolais wine area about 15km from us. They're a Belgian couple who joined this year."

Selecting a charity to support was straightforward, she explained: "A friend of ours is very into gardening and had visited an event and these people were there. She talked to them and decided this is a very good charity to support. She has a disabled granddaughter, so it all sort of fitted in."