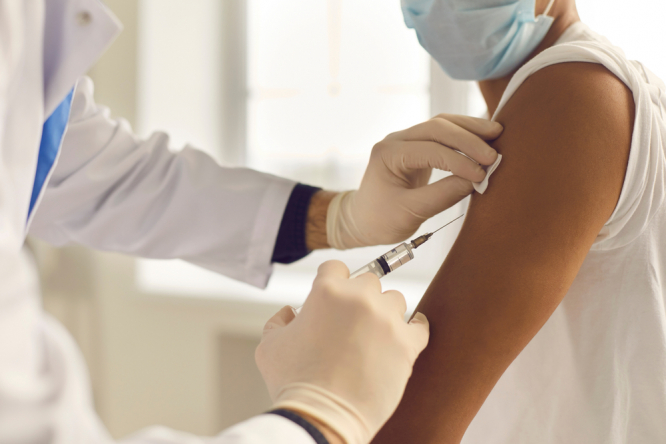 The government’s hopes to give a first dose of the vaccine to 75% of adults and full vaccination to two thirds of people in France by the end of August Pic: Studio Romantic / Shutterstock

Clusters of the variant are also being monitored around the country, with the Landes and Bas-Rhin under particular scrutiny.

Some 70% of new cases in Landes are the Delta variant; it is the only department where the epidemic is increasing and the only one over the alert threshold of 50 cases per 100,000 per week (the national rate is 24).

The announcement was made today by government spokesman Gabriel Attal, who stated the figures for the Delta variant are also around 12-13% in Ile-de-France.

It comes as a new study has also indicated that cases of the variant have been rising significantly in that region. In comparison, however, the British Medical Journal states this week that "almost all new cases" in the UK now concern this variant.

Results from the new study published on June 20 (which have not yet been peer-reviewed) confirmed “rapid growth” of the variant in Ile-de-France.

Researchers ran tests on 5,061 positive test samples in Ile-de-France taken from May 31-June 8 and found that Delta could be 92% more transmissible than other variants. Even so, 94% of the people tested had not been hospitalised.

After modelling different scenarios, they concluded: “The Delta variant has the potential to initiate a rebound of the epidemic between now and the end of summer, and a major challenge for public health authorities.”

They added: “The next few weeks will be decisive.”

Studies from the UK have estimated that the variant is 34-60% more transmissible than other variants.

Health authorities are calling for people in France to get fully vaccinated to protect against the Delta variant and avoid a new wave of the virus in September.

At a press conference yesterday (June 22) Health Minister Olivier Véran said: “We have the doses, we have the organisation, we cannot lose this opportunity.”

The government’s current goal is to have given a first dose of the vaccine to three quarters of adults and full vaccination to two thirds of people in France by the end of August.

Figures from June 21 show that over 32 million people (48.14%) of people in France have now received a first dose.

Mr Véran said that around four million people are being vaccinated each week, despite a recent dip in numbers of people making appointments.

France will also start implementing a new mass vaccination strategy in areas where clusters of the Delta variant are identified to try to stop it spreading, as advised by health body la Haute autorité de santé.

The strategy has already been deployed in Brittany and Bordeaux.

There are also concerns over older and vulnerable people who have not yet been vaccinated, despite being eligible to do so for months.

Mr Véran said five million people aged over 55 had not yet been vaccinated, along with around 35% of people with health issues that make them vulnerable to the virus.

To counter this, more vaccines will be offered in dedicated health centres (such as dialysis wards for diabetics) and in local areas for people who are less mobile and the homeless.

Variant spreading around the world

Mr Véran said: “[The Delta variant] is becoming dominant around the world.

“It is present in 75 countries, progressing in Europe and is responsible for a rebound of the epidemic in the UK.”

In the UK, Delta is now the dominant variant with researchers linking a rise in hospitalisations – particularly among younger people, who are less likely to have been vaccinated – to the rise in cases of the variant.

Dr Karine Lacombe, head of infectious diseases at Saint-Antoine hospital in Paris told radio station RMC this could be due to the UK’s vaccination strategy.

She said: “In England they have prioritised giving a first dose of the vaccine and especially AstraZeneca. This strategy is a failure.”

Figures from Public Health England show that the AstraZeneca vaccine gives just 30% protection against serious illness from the Delta variant after one dose. AstraZeneca says this rises to 92% after two doses.

Dr Lacombe said increasing vaccinations in France was the best way to counter the spread of the variant. “There is a reduction in the number of cases increasingly among people who have had two doses of the vaccine. We need to continue [vaccinating people]," she said.

Cases of variant may be underestimated in France

But Dr Lacombe also warned a fourth wave of the epidemic was on the horizon in France due to how contagious the Delta variant is, however she said that "it is not certain that this variant causes more serious forms of the illness".

She added: "We still see case numbers [overall] diminishing in France and more and more people are getting vaccinated with two doses. We must continue with that. The Vaccine protects 100% from the most serious forms of the illness, even with variants."

In Portugal, the variant currently accounts for 77% of all cases, and in Russia 85% of tests screened for variants in the past four weeks have been found to contain the Delta variant.

It is thought figures for France may be an underestimation due to the country’s relatively limited ability to identify strains of the variant.

The French study said that while the UK had sequenced 49,000 genomes linking positive tests to the Delta variant, France had sequenced just 176.

In addition, not all laboratories in France are able to identify variants, meaning last week only 37.5% of positive tests were screened to identify which strains of the virus they contained.

This comes as India’s health ministry has said a new mutation of the Delta variant called ‘Delta Plus’ is a variant of concern.

In a statement the ministry said the Delta Plus variant had been identified in three states in India.

The variant is more transmissible than the original Delta variant, binds more strongly to receptors in lung cells and affects how well antibodies are able to respond to the virus.

The health ministry has advised that health measures to stop the spread of the virus are increased in states in India where the new variant is known to be present.