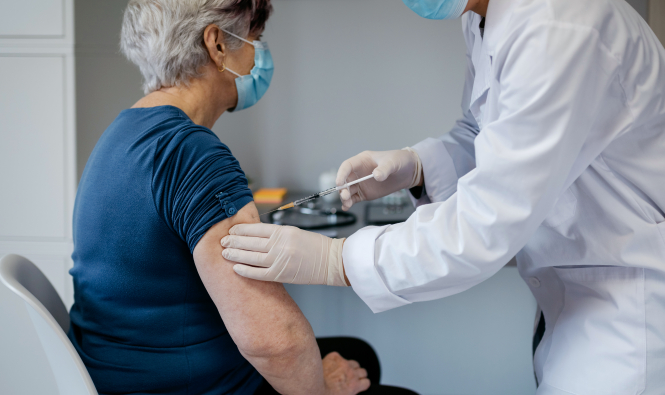 After mid December, over-65s in France will have to receive their booster vaccine dose before six months and five weeks have passed since their second, in order to avoid their health pass from being invalidated Pic: David Pereiras / Shutterstock

A record 100,000 people in France booked Covid booster dose appointments in the hour after President Emmanuel Macron announced that they would soon become a compulsory part of the French health pass for over-65s.

The booster jab must have been received by six months and five weeks after the second jab if the health pass is to continue. If not it will be deactivated.

This rule will take effect on December 15.

The pass is needed to visit a number of public spaces including restaurants and for travel on long-distance transport such as TGV trains and domestic flights.

Over the course of yesterday (November 9), a total of 150,000 booster slots were booked, while in total, 274,000 vaccination appointments – for first, second and third doses – were reserved.

The new rule was announced during an address to the nation by the president last night.

“Six months after the vaccine, immunity decreases and therefore the risk of developing a serious form [of Covid] grows again,” he said.

Vaccination appointment numbers had already been rising among groups eligible for the booster, with 98,000 slots booked on Monday (November 8) alone: double the number arranged on an average day in the previous week.

Since the beginning of October, the Doctolib portal has observed “a continued growth in [the number of people] booking their booster dose, with a monthly increase of 60% in the number of third dose appointments booked each week.”

The platform added that “on average there is a six-day wait for receiving a booster dose.”

In reaction to the president’s announcement, Economy Minister Bruno Le Maire said: “The health pass, even if it provokes concerns among restaurant owners and hoteliers, is the best solution to the return of the epidemic.”

Those with health conditions making them particularly vulnerable to Covid are “encouraged” to receive a booster, although for the moment it will only be over-65s whose health passes will be conditioned upon this action.

This is because the pass shows an individual’s date of birth, meaning that if vulnerable people under 65 were obliged to receive a booster dose it may be obvious to anyone scanning their QR code that they had a certain health condition, so compromising their patient confidentiality.

In December, people aged 50-64 will also be offered their Covid booster, as “83% of those in intensive care are over 50,” the president said during last night’s speech.

French government figures show that as of November 8, nearly 3.8 million people have received a third vaccine dose (or second in the case of the single-dose Janssen jab) in France.

There are currently approximately 7.7 million people who are eligible for the additional vaccine, meaning around 49% of eligible people have so far taken up their booster.

In its November 4 update, santépublique.fr noted that, while around one in two care home residents had had their third vaccine dose, this proportion sank to 20% for over-65s in general.

A Pfizer-BioNTech report published on October 21 suggested that its booster doses are 95.6% effective against symptomatic forms of the virus, while an August study carried out by Israeli health maintenance organisation Maccabi confirmed that in over-60s third doses had an efficacy level of 86%.