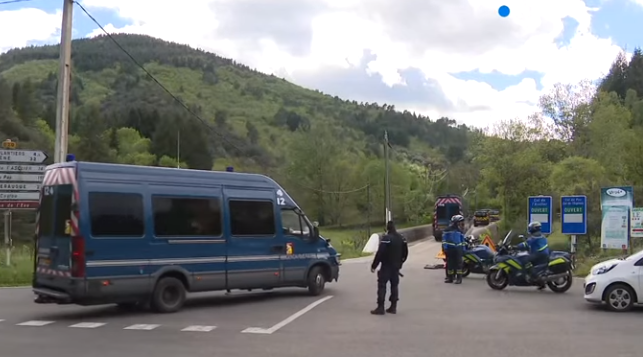 Police are continuing the 'perilous' hunt for a man suspected of killing two colleagues at the sawmill where he worked in the mountainous and remote Cévennes area of southern France.

Around 300 officers are involved in the search for the 29-year-old, who is believed to have shot his manager shortly after arriving for work on Tuesday and then killing a work colleague before disappearing into the woods near the village of Les Plantiers, Gard.

Eyewitnesses told police he pulled the gun after being reprimanded for not saying 'hello' to a colleague. He had recently clashed with his boss about working hours, according to investigators.

"[It] is extremely difficult, even perilous," a police spokesperson told Franceinfo about the conditions for the manhunt.

The suspect is reported to be an avid hunter who knows the rugged and remote area well and had spoken of wanting to train as an army sniper. BFMTV has reported that his application was rejected because of eyesight issues.

"This individual, I must stress, knows this area perfectly - [it is] very difficult to access, very steep. We are obliged to limit land searches at night because the terrain is very dangerous," the spokesperson said.

He urged people living in the area to "remain cautious, to stay at home and … to call [police] in case of any doubts".

Earlier, Nîmes public prosecutor Eric Maurel appealed to the suspect to hand himself in to police.

"I'm calling on him to listen to reason, lay down arms and explain what spurred him to act as, part of a peaceful surrender," he told reporters at the scene.

1 day ago
5
Covid France: Changing rules for testing and quarantine this summer

Did you know that the Cancan started out as a feminist dance?
21 June 2021

Help for replacing an old oil boiler with a heat pump in France?
6 May 2021
More from French news
More from Connexion
Get news, views and information from France
Join the newsletter
Subscribe to The Connexion