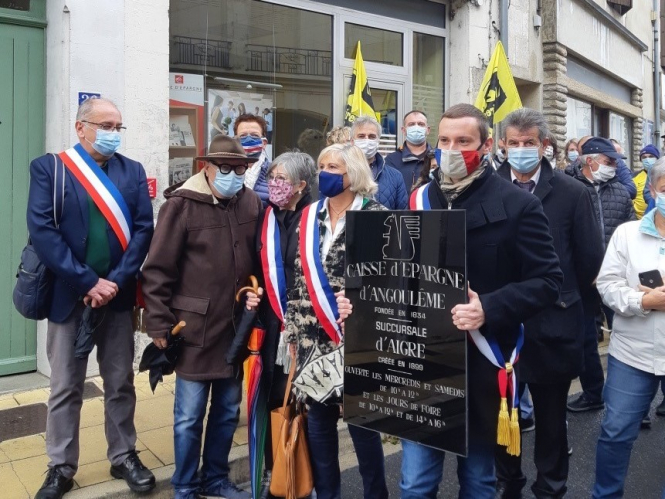 The mayor of Aigre organised and took part in a demonstration against a bank, which decided to shut its branch in the town centre, leaving locals concerned.

The protest gathered around 300 people, who stood in front of the now closed Caisse d’Epargne agency.

Renaud Combaud, 24, who was elected major this year, said the demonstration “has not changed anything but shows people will not just put up with towns being deserted by banks.”

He said the first he was told of the bank’s plans was when the director of the Caisse d’Epargne Aquitaine Poitou–Charentes co-opertative, paid him a “courtesy visit” on September 7 and told him the branch would shut at the end of the month.

“I told him I thought it was a bad idea but it was obvious the decision had already been taken.”

Aigre is a town of 1,600 people situated in the department of Charente in the southwest of France.

The shutting of the branch means that people who want to keep their Caisse d’Epargne accounts – and Mr Combaud said some people had accounts going back generations - will have to travel 22km to the town of Ruffec, which has a population of around 3,500, to go to an agency.

“They are often old people who do not like to drive, and are the same people who are not at ease using computers or mobile phones to do banking, and often just do not trust technology for important things like banks,” Mr Combaud said.

“I have advised them to switch accounts to Crédit Agricole Charente-Perigord, which has an agency on the edge of town so they do not have to go to Ruffec, but not all want to.”

The town also has a post office which offers La Banque Postale services.

Mr Combaud said that the loss of the bank was also a blow to shopkeepers and market traders in the town.

“We still have shops open in our town centre, and it was useful for the shopkeepers to go to the bank to put in and take out cash, for example,” he said.

“Some of our shopkeepers are very attached to cash, and do not even have machines for bank cards – this makes their business more complicated.

“There is also the symbol attached to Aigre losing its bank – we are, in Charente terms, and in rural France terms, a large commune. If they can just pull out of here, there is not much hope for smaller communes wanting to keep their bank agency.”

Banks all over the world are adjusting to clients moving to online banking by closing branches and releasing staff.

In the summer, TSB in the UK announced the loss of 929 cashier jobs in branches, while the Co-op Bank in the UK said 18 branches will be shut and 350 jobs will go.

Also in this summer, Credit Suisse in Switzerland said 37 branches are to be shut and 500 jobs cut, while in Germany Commerzbank said 200 branches will be shut by 2023.

So far France, especially in rural areas, has been spared compared to other countries, in part because of the extensive networks of agencies used by co-operative banks, which compete fiercely with each other for customers.

French banks are also innovating, training agency staff, who often work alone or in small teams, to extend their abilities beyond bank activities into areas such as selling insurance, or giving financial advice.

France’s investment banks, nearly all of which are based in Paris, have been harder hit.

Figures gathered by Association Française des Banques, one of the industry’s main trade bodies which includes both co-operative and stock-market listed banks, show that at the end of 2019, 360,000 people worked in banks, compared with 377,000 in 2012, a fall of 4.5 %.

At the same time banks continue to be one of the main recruiters in France, with 44,000 people taken on in 2019, a figure which has remained constant over a number of years.

No one was available to comment at Caisse d’Epargne Aquitaine Poitou–Charentes.