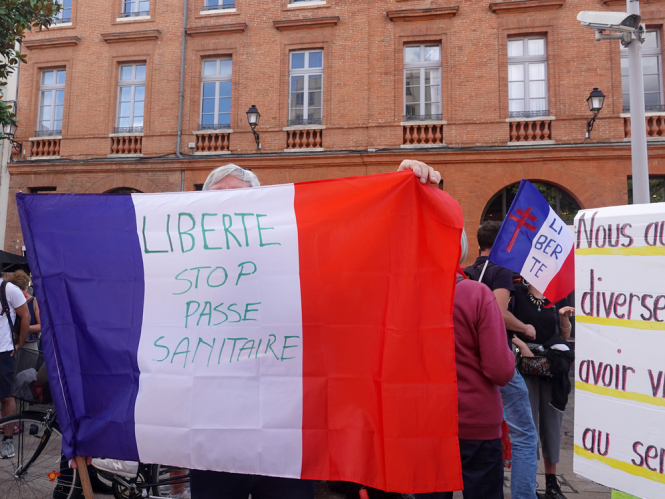 The protests were the seventh weekend of action, but the third consecutive weekend when protester numbers dropped Pic: Irinacapel / Shutterstock

Almost 159,500 people protested against the health pass this weekend, in the seventh consecutive Saturday of action, with 222 marches counted in total.

Saturday, August 28 marked the third consecutive drop in the number of protesters, according to figures from the Interior Ministry, down from 237,000 on August 7, and 175,500 on August 21.

France, Valence. For the 7th week, throughout the country, people protests against covid mandatory vaccination and #VaccinePassport #PasseSanitaire #NoGreenPass #manifestations28aoutpic.twitter.com/MYslbimgtz

The protests were widely peaceful, with ministry figures showing that 16 people were arrested nationwide, of which two were in Paris. Three law enforcement officers were injured.

Tear gas was used against protesters, including in Nice.

FRANCE: again, not a good look for the Police - tear gas used against protesters - and tourists caught in the middle - isn’t a good look #NonAuPassDeLaHonte #manifestations28aout
pic.twitter.com/ixerNZxLnA

The protest group and organisers, dubbed Le Nombre jaune, an offshoot of the gilets jaunes movement, said it had counted protesters by city, and counted at least 319,000 protesters across the country.

This is a lower count from the week before, when the group reported 357,000 people on Saturday, August 21.

Florian Philippot, leader of the Les Patriotes movement, who had organised one protest in Paris, said he was aiming to organise “a large, unique and national event on September 4”.

But Health Minister Olivier Véran this week said that the “last objections were falling faced with the success of the health pass”. He said that use of the pass could be extended beyond the current date of November 15, or until “Covid disappears from our lives”.

Anti-vax views ‘will cause many deaths' in French overseas territories
Millions of workers will need a French health pass from August 30
Anti-vax leaders should ‘pay’ for spreading fake news, says French GP

16 hours ago
3
Fifth Covid wave: Ministers to meet, what measures could France take?

Animal spotted by farmers in Calvados, Normandy confirmed to be a wolf
23 November 2021

All new cars in France to have automated speed monitors from July 2022
24 November 2021
More from French news
More from Connexion
Get news, views and information from France
Join the newsletter
Subscribe to The Connexion