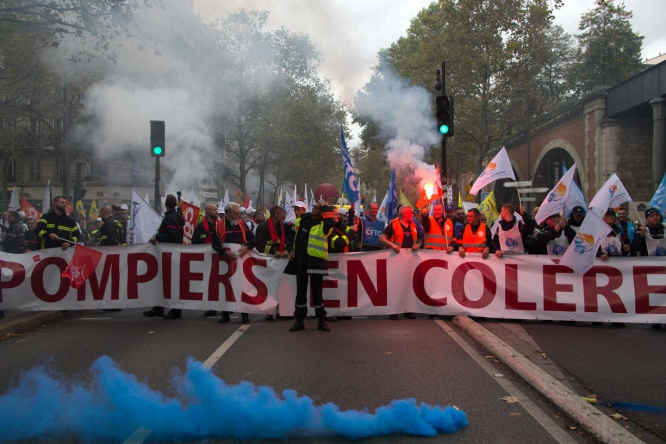 Firefighters marched on Paris under the Pompiers en Colère banner, with some demonstrations becoming more tense later in the day
By Connexion journalist

A delegation met with the minister of the interior yesterday, but left with no agreement.

Outside of the main march, some protesters were dispersed using water cannon and tear gas after tensions escalated, and firefighters were pushed back by riot police. Six people were arrested after alleged “violence” and “throwing of projectiles”.

Grievances include complaints about working conditions, not enough professional personnel, lack of pay, and issues caused by too many calls to the Samu on number 18 being passed over to the fire brigade to manage.

The group is calling for a unique firefighter emergency number, as well as a re-evaluation of pay. They said that a junior firefighter earns just €1,500 before tax per month, and claimed that the bonus amounts paid to staff have not increased since 1991.

Groups of firefighters tried to march on the Paris ring road (périphérique), but they were pushed back by law enforcement, who threw tear gas to limit their movements, and forced protesters to stay in the city’s Place de la Nation.

Buses of protesters arrived from across France.

Police have been criticised for their allegedly violent response to the protest, with one photo in particular (below) shared on social media as a symbol of the in-fighting between emergency services.

One march leader said: “We have decided to continue the strike action for the next two months.”

The firefighters claimed that their working conditions had deteriorated, and they were facing increased danger on call-outs.

One firefighter at the march, Eric Brezault, who said he was from the south of the country, told newswire Reuters: “There is real anger and the problem is, we are not being listened to. That’s why people are getting angrier, and it’s starting to become violent.”

Another firefighter, Julien from Dordogne, spoke to news source FranceInfo. He said: “We do not have enough professional firefighters in stations, and we are forced to find voluntary firefighters. It causes lengthy delays and operational responses are not adequate.

“For example, one station is usually forced to get back up from one or two other stations to call and ambulance, because there is only one firefighter at that station.”

Another striker said: “We are called out to help someone, and when we get there, the person pulls out a blade. Caught by surprise, we try to control it, but we could have been injured.

“We are a bit fed up of being called out for whatever: a sore throat, back pain...we are always out, so we cannot train...it endangers our activity and the people we do actually need to help.”

A further protester added: “All public services have been abandoned, whether it’s firefighters, police, hospitals...today, we are here to save the few services that we still have left in France.”

Another anonymous marcher said: “If I had a member of the government in front of me, I would tell them to come do a 12-hour shift with us to see the reality on the ground. Maybe it would change their mind."