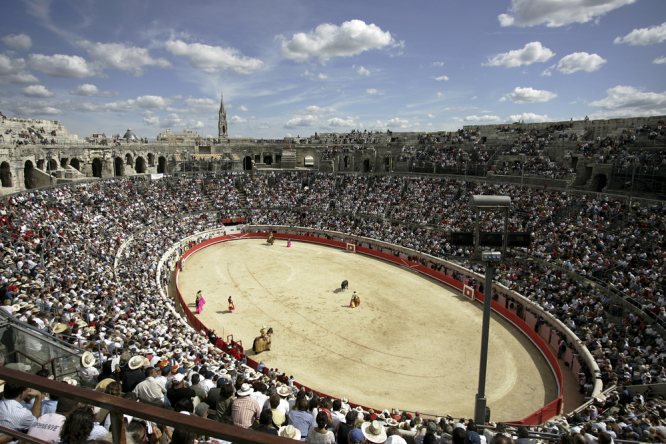 Courts have ruled in favour of continuing bullfighting in Nîmes, Occitanie, after animal protection group the Société Protecrice des Animaux (SPA) brought several key organisers of the events to trial for “acts of cruelty against animals”.

Bullfighting is commonplace in the town in the South of France, with two of the biggest events being organised for Whitsun in June and the grape harvest in September.

The SPA brought the case in a magistrates' court against horseback bullfighter Léa Vicens, event organiser Simon Casas and the mairie in Nîmes, based on animal cruelty laws that mean perpetrators can face up to two years in prison and fines of €30,000.

The judges rejected the claim as the law also specifies that it “does not apply to bullfighting in cases where local traditions might be disrupted”.

The SPA will now have to pay €3,000 to cover the costs of bringing the case to court.

It is not the first time that the organisation has tried to use legal action to bring about an end to bullfighting in France. Cases brought by the SPA in Bayonne, Béziers, Dax and now Nîmes have all been rejected.

A date has not yet been set for an upcoming trial in Carcassonne.

In Nîmes, the courts did recognise that bulls experience  “significant suffering” during bullfights.

The judges said: “The organisation of the fight means that it can be qualified as an act of cruelty towards bulls, as the steps are intentionally accomplished with the goal of provoking suffering or death of the animal.”

They also maintained that bullfighting was a popular local tradition, adding: “Annual bullfights have been held here for more than a century… the continued interest of a sufficient number of people means we should retain the local tradition.”

The SPA contested this, citing a 2018 poll* in which 74% of people in France said they were in favour of banning bullfights which resulted in bulls dying.

Other attempts to legally curb bullfighting in France have also had little success.

In October 2020, MP Samantha Cazebonne put forward a suggestion to ban minors from attending bullfights during discussions in the Assemblée Nationale on a new animal rights law.

In an open letter published in Le Figaro, 40 defenders of bullfighting responded: “Before anything else bullfighting is a spectacle, an art, culminating in the meeting of courage and honour at play in the arena. Banning an art is beneath a modern democracy.

“Nobody has to attend. We ask the government that nobody is excluded from attending.”

Ms Cazebonne’s suggestion was eventually found to be unconstitutional.

In January 2021, a number of MPs also put forward a law that would exclude bullfighting from the category of events that are protected due to being traditional. They described bullfighting as “a practice from another time that tries to legitimise the mutilation and abominable suffering of thousands of bulls”.

The law was sent to a standing committee for inspection, but is not currently scheduled for further discussion in the Assemblée Nationale.

*Poll by Ifop for the Fondation Brigitte Bardot conducted among 1,010 people representative of the French population on May 28 and 29, 2018.