August edition of Connexion out this week 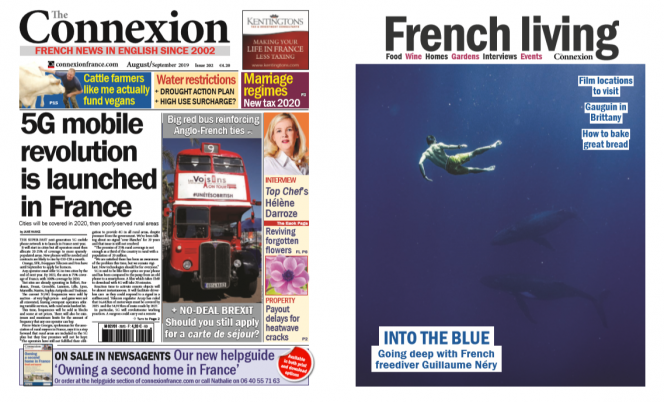 The August edition of Connexion has been delivered to subscribers and will be available in shops from this weekend.

Non-subscribers can order a pdf version of Connexion today via this link, while subscribers receive the electronic version free of charge, along with access to all online articles, including any that are behind a paywall. Subscribe today and have immediate access to the electronic version. Your printed copies with start with the September edition.

With chances of a no deal rising - should Britons in France still apply for a carte de séjour?

Franco-British literary festival is back

Is obligatory school from age of three a good idea?

Anger at green light for 21 wind power projects: we give locations

The farm in an underground Paris car park

Where to sit a language test for French nationality

Is France close to a sixth Republic?

How to keep mosquitoes away

Make sense of ... the French and holidays

Your questions answered on car registration, including rules for second home owners with a UK car in France

Stone masons are in demand - how do you become one?

Summer’s here so watch out for the wine burglars

arn conversions - from dream to paperwork to reality

DIY: The secrets of shutters

Divorce and joint ownership of a French home

Notaires must confirm sellers are not bankrupt

Update on claiming back social charges as a non-resident

Tax-efficient tips for a move to France

Why changing your marriage regime could get costly from 2020

Make money from renting out your swimming pool

Why French birth certificates last a lifetime - and are great

Gilets jaunes: There may be trouble ahead

Lifestyle scandals are the favourite weapon for political assassins

'Food for vegans ‘is subsidised by cattle farmers like me’

Interview: Home is where the heart is for Top Chef star Hélène Darroze

The future for natural weed killers

The best film locations in France

Napoleon: winner and loser in Europe's game of thrones

Open Gardens across France to visit

What's on in France in August - from sea shanties in Brittany and Mirabelles in Metz to fireworks in Cannes...

Subscribe here and read the edition online immediately (mobile and tablet friendly) + receive a complimentary PDF of the edition. Your print editions will start with the September edition. Subscriptions start at €13.50 for 3 months to a French address 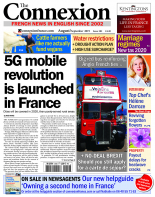 Owning a Second Home in France
More from French news
More from Connexion
Get news, views and information from France
Join the newsletter
Subscribe to The Connexion