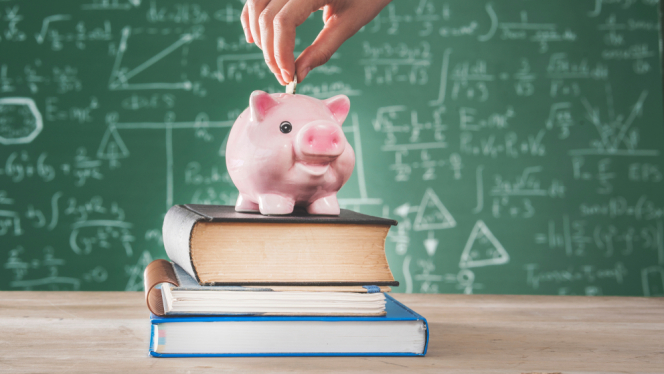 The amount of the back-to-school grant depends on the number of children you have, and your income Pic: Sebra / Shutterstock

Three million households in France are today set to receive financial aid to help children aged 6-18 to go back to school, with the average cost per collège student estimated at almost €200.

The Allocation Rentrée Scolaire (ARS) grant is intended to help lower-income families purchase necessary items such as new school stationery, clothes and sports equipment; as well as contribute to canteen lunches and even extra academic tutoring.

Three million households are eligible, representing five million children aged 6-18 nationwide. This year, it will apply to all children born between September 16, 2003; and December 31, 2015; and will also apply to children who are already signed up to CP class (first year of primary school).

In mainland France, the aid will be sent today (August 17).

It is allocated by the Caisse d'allocation familiale (CAF) or the mutualité sociale agricole (MSA), and is means-tested.

To be eligible, households must not earn more than:

The benefit is capped at €5,842 for any further children.

The amount given also depends on the child or children’s age:

The amount was increased by €100 last year, temporarily. This extra amount is not expected to apply this year.

Yet, this year, a ‘Pass'Sport’ allowance of €50 will also be paid to ARS recipients, which is intended to help with the cost of sports classes and sports club registration.

People who are already registered for any social benefits in France do not need to do anything to receive the aid; it is sent automatically.

Those who are not automatically registered must download a form from the CAF website and make a request online.

For more well-off households, there are other benefits. These include a tax reduction for each child at school, depending on age. There is a reduction of €61 for a child at collège; €153 for a child at lycée, and €183 if they are in higher education.

Households who employ a nanny or have after-school childcare can also benefit from a tax reduction equal to 50% of the expenditure, with an annual cap of €12,000.

It comes after a new study shows that the cost of back-to-school in France has risen by 5% in five years.

The figures from the Familles de France association show that the average cost of a child entering in 6ème (the first year of secondary school, at collège), is now €199.34.

But Familles de France has called for “a better spread of the amounts...in order to better respond to the increasing nature of the cost of schooling (the fact that expenses increase as one progresses through the school years)".

One parent and ARS recipient, Vanessa, who lives near Bordeaux, agreed. She told Le Figaro: "I don't find it very logical to give almost as much for a child in primary school as in secondary school. For my daughter, who is entering CM1 (Year 5), I only spent about €30.”

Vanessa said she would spend the rest of the money on sports classes for her daughter.

When it comes to older students, student association la Fédération des associations générales étudiantes (Fage) found that the average cost of ‘going back’ to university for someone aged 20 not living at home, was on average as much as €2,392.47.

The costs vary considerably by region, the federation added, with costs as much as €300 higher in Paris and Ile-de-France, largely due to the cost of food, clothes, hygiene products, and internet access.

What is France's back-to-school grant, and how much is it?
Vaccinated pupils in France to stay in school if class has Covid case