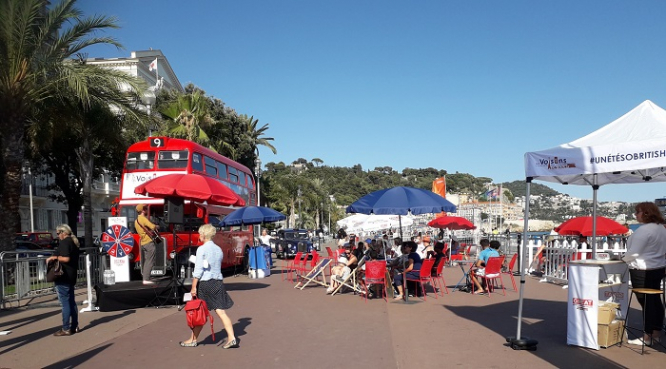 Staff from the British Embassy in Paris have been on tour, travelling from Perpignan to Nice in a red bus.

The idea was to talk about Britain to French people and for Britons to be able to ask questions about Brexit.

Connexion caught up with the bus in Nice, where a large non-British crowd was enjoying a quiz about UK trivia and a guitarist sang Beatles hits.

Visitors could take a virtual reality tour of Scotland or London, take an English lesson or enjoy tea and shortbread.

Communications head Emily Partington said: “It’s gone down very well, though I think visitors would have preferred iced tea! I tried to explain we drink tea when it’s hot because it helps you cool down.

It’s been brilliant to talk to people about their experiences of the UK, from people who remember being an au pair to ones interested in study or exchanges.

“Just two said ‘you’re leaving us’. We discussed the history we share and the many links between us. In context, we can be positive about the future, even if it feels difficult now.”

A Finnish Nice resident told us Britain made her think of royalty and business.

“It’s a magnificent country with friendly people,” she said.

A French woman said Brexit worried her: it would be a loss to Europe, which would be weaker.

She thinks of rugby, which she loves, and London, which she found beautiful and friendly, though she did not enjoy chips with vinegar.