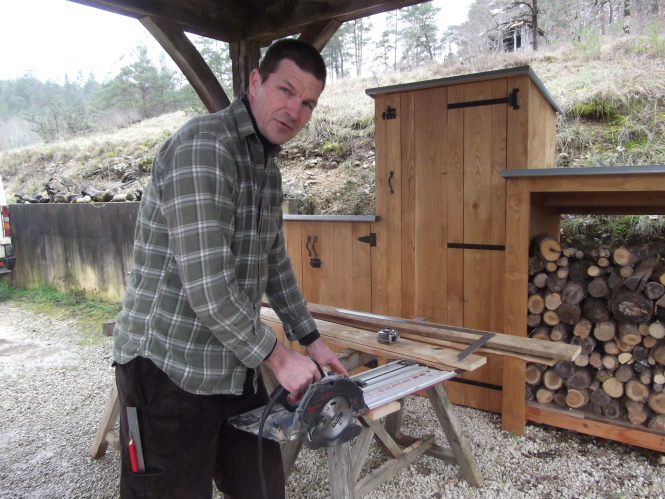 It means he must also step down as a local councillor.

Mark Lawrence, 48, lives in the Dordogne with his French partner and their five children and has worked as a self-employed carpenter for 20 years. An online petition set up by a friend has attracted more than 34,000 signatures.

“If they changed things for me, what about all the other people who have been refused nationality?  “I hope they will give me a residency card when the site opens in July and I will apply again in 2021.”

His application was ‘adjourned’ rather than refused, which can happen in cases where the prefecture thinks the person needs more time to establish themselves. He has the right to try again in two years.

Mr Lawrence said he had a bad financial period in 2016-17, but he has never asked for help from the state and has always paid his social charges and collected VAT.

He said he had been “amazed” by the media reaction to his story.

“In a way, it has made my local links stronger, because everybody is talking about it. It is just the official side which is really not very nice. It feels a bit like splitting up with a long-term partner. It is a strange position to be in.

Official state figures show 624 Britons (not including those with French nationality) were elected as councillors in 2014. No Britons can stand or vote this month as it is limited to French or EU citizens.

Connexion has heard from dozens  of those affected. Jan Greenwood, who was a councillor for Le Busseau in Deux-Sèvres, said her mayor had asked her to stand in 2014, as Britons made up around a fifth of the 700 resident population.

“It is a shame,” she said. “I got involved in every­thing.

“I had French people asking me to help them, which I feel is a mark of my level of acceptance by the community. I have got to know so many people as a result and I feel really at home here.

“Lots of people have come up to me and asked if I am going to stand again and they are amazed that I can’t.”

See also: 'I will reapply for nationality in two years'

I became French partly to save my army job

An English teacher who works with the French army has said he obtained French nationality partly as a safeguard to continue doing his job.

As a fonctionnaire (civil servant), Nick Rowswell, 48, was worried that Brexit could mean he would lose his job, as such posts are reserved for French and EU citizens.

In the end, it was announced that the jobs will be protected for those Britons living in France before the end of the transition period, but this was not clear when he applied for nationality at the time of the Brexit referendum result in 2016.

Mr Rowswell, who lives with his French partner in Bourges, Cher, has been in France since 1990 and started a nationality dossier in 2014, but then put it aside due to the paperwork.

“I like the values and the way of life here,” he said. “And if you’ve got a job, a home and you pay taxes, you really feel you should also be able to vote. As soon as Brexit was mentioned, I thought I’ve got to do it.”

He said he also thought it wise because of his job, which he has been doing for 20 years since he passed a teaching English as a second or foreign language qualification at the University of Orléans.

“As I work in the defence sector and I am a civil servant, it could have been tricky,” he added.

He said he did not find the process difficult: “At the interview they asked me to name the last French film I had seen, and as I had been to see one the night before, that was easy, and we also talked about Joe Dassin, a French singer.

“I was also asked about the Republic and I think assimilating the values of France is an important part of it.”

He has recently been awarded a medal for 20 years of work with the army, which also gave him an extra day’s holiday.