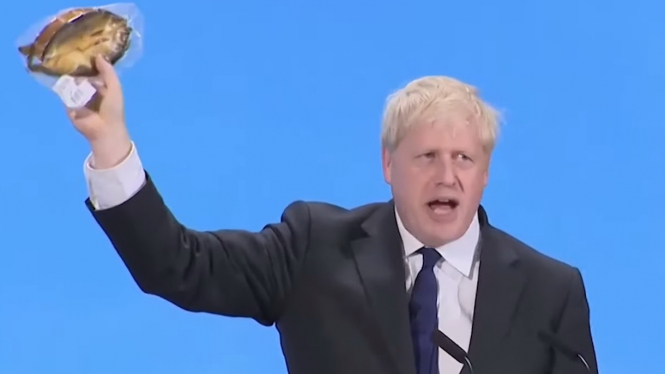 MEP Guy Verhofstadt was referring to claims during the Vote Leave campaign that Turkey was about to join the EU and to a recent speech by Mr Johnson in which he stated that costs of sending kippers by mail order had been "massively increased by Brussels bureaucrats" who required each kipper to be accompanied by a ‘plastic ice pillow’.

In fact Turkey is far from meeting the criteria to join the EU (and the UK, which has a veto, has been one of the strongest supporters of its accession) and the European Parliament recently recommended that negotiations for it to join to be formally suspended.

The kipper rules were found to be British, not EU, ones and Mr Verhofstadt said he would explain to Mr Johnson that the "EU has no rules on the packaging of kippers in the UK".

The reference to mini-deals refers to statements by Mr Johnson during his leadership campaign that a series of ‘side deals’ with Brussels could mitigate the effects of a no-deal.

Mr Verhofstadt said Mr Johnson would find the EU to be “an open and constructive partner” but it is “united in the view that a no-deal exit will not be mitigated by any form of arrangements or mini-deals between the EU and the UK”.

He added: “Politicised language from the Conservative leadership raising the spectre of a no-deal Brexit is unhelpful, irresponsible and only increases the risks of a catastrophic severance, which could destabilise the global economy.”

The comments about mini-deals, also reiterated in a formal statement by the European Parliament’s Brexit Steering Group (BSG) which Mr Verhofstadt heads, may not bode well for campaigners'  hopes that the EU and UK will agree to ‘ring-fence’ the ‘citizens’ rights’ part of the negotiated Brexit deal.

In its statement yesterday the BSG reminded Mr Johnson that the entry into force of any Brexit withdrawal agreement will need the European Parliament’s consent.

It said if the UK decides not to revoke article 50 and remain in the EU then an “orderly exit [with the deal]… is in the overwhelming interests of both parties”.

It said the withdrawal agreement cannot be reopened and the British government had previously agreed to this, however the parliament is open to redrafting the accompanying political declaration on the future relationship.

Such changes could include agreeing to a “more ambitious future partnership such that deployment of the Irish backstop would not be necessary”, the steering group said.

However it said “recent statements, not least those made during the Conservative Party leadership campaign, have greatly increased the risk of a disorderly exit of the UK”, which would be “economically very damaging… even if such damage would not be inflicted equally on both parties”.

In his first speech as prime minister yesterday Mr Johnson said that “we will do a better deal” and “I have every confidence that in 99 days’ time we will have cracked it”.

He said the UK would come out of the EU on October 31 and he hoped for a “new partnership with our European friends” that would be “as warm and close and as affectionate as possible”.

The first step towards this would be to “repeat unequivocally” a “guarantee to the 3.2million EU nationals now living and working among us… that under this government you will get absolute certainty of the rights to live and remain”.

Mr Johnson made no reference to rights of British people living abroad in the EU.

He said that he was convinced they could do a deal with no checks at the Northern Irish border but “without that anti-democratic backstop”.

However at the same time the UK would prepare for the “remote possibility that Brussels refuses any further to negotiate and we are forced to come out with no deal”. In which case he said the UK would "have the extra lubrication of the £39bn" (referring to his threat to withhold payment of the money the UK owes the EU).

Dear Boris, congratulations on your appointment. I look forward to meeting you to discuss - in detail - our cooperation.

“Is it an orderly Brexit – the choice and preference of the EU?... Is it a no-deal Brexit? That will never be the choice of the EU, but we are prepared.”

He added: “We will work all along the next weeks and months with the new UK government in the best possible way in a very constructive spirit to facilitate the ratification of the withdrawal agreement”.

He had previously met Mr Johnson during the London Olympics and “I think he’s clever”, Mr Barnier said.