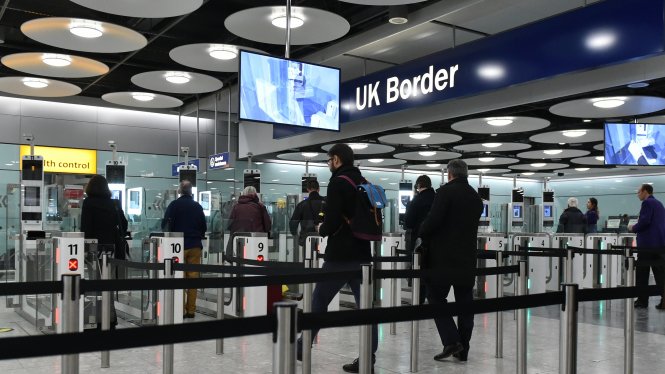 British and EU passport holders may still use e-gates to enter the UK Pic: 1000 Words / Shutterstock

I have a carte de séjour – when I arrive at border posts in the UK or EU which queue do I join, the one for EU citizens or the one for non-EU citizens?

Post-Brexit, the rules for entry and exit of British passport holders into the EU have changed as checks and passport stamping now apply to British visitors to the EU.

Border guards, for example, are entitled to ask British visitors for evidence of healthcare cover and sufficient funds for their trip (in reality readers do not so far report being asked for this, although some report being asked about the purpose of the trip).

Holders of Withdrawal Agreement (WA) residency cards should not be asked for these extra documents or have their passports stamped when crossing external Schengen area borders, such as when entering France from the UK. However, they need to proactively present evidence of their residency to a border guard, ie. showing their card if they have one (or other proof, such as an email receipt of application, if not).

Post-Brexit, there are also specific rules on passport validity.

British visitors to France or other Schengen area countries must make sure their passport was issued no more than 10 years before the day after they will leave the Schengen area, and that it is valid until at least three months after the planned departure date (a checker tool is available here) .

These rules do not apply to WA residency card holders, who only need to ensure their passport is within its validity period.

In order for the checks and/or stamping to take place, British passport holders (whether they are visitors of residents in France) are no longer entitled to use automatic e-gates on crossing EU external borders, and if there are EU/EEA/Switzerland and ‘all passport’ lanes, then they should use the latter.

It is possible that faster arrangements will become possible next year when an ‘EU Entry/Exit (EES) is set to come in – a new automated system of checking non-EU passports and recording visitors’ details that will replace manual stamping at external Schengen borders – however the details of how this will work or when it will start have not yet been clarified.

As for entering the UK, British passport holders, whether or not resident in the UK, are still eligible to use the fast e-gates as long as they have a biometric passport (with a chip) or otherwise UK/EEA manual checking lanes.

The UK also continues to allow this to EEA citizens, however if they enter via a manual checking lane their passports will be stamped if they are visitors.

EEA citizens using e-gates are advised to keep evidence of when they entered, such as their boarding pass, as they are no longer entitled to stay in the UK for more than six months at a time.

As of this month, EEA citizens can no longer enter the UK with a national identity card.

I hold a residency card – why was passport stamped at border?

Etias: What is the new EU entry process, and how may it affect you?

Can I travel in the EU with my WA residency card?

6 hours ago
5
Omicron: Zero cases of new Covid variant of concern in France so far

Eure in Normandy turns negative visitor reviews into marketing tactic
24 November 2021
More from Brexit
More from Connexion
Get news, views and information from France
Join the newsletter
Subscribe to The Connexion