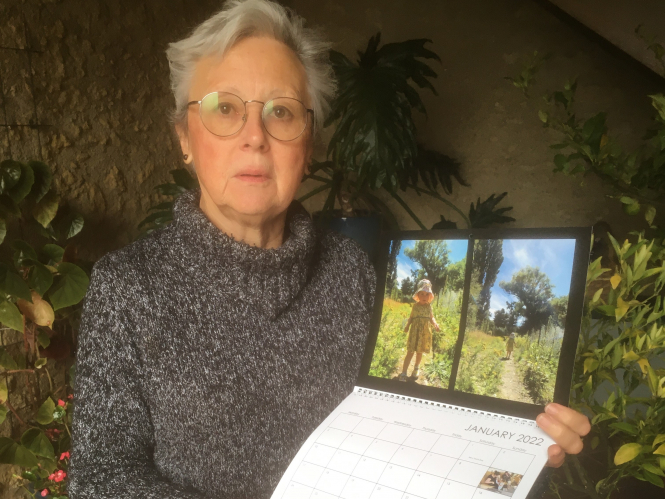 Reader Sue Wolfenden was annoyed to be charged €10 to receive a gift of a calendar Pic: Sue Wolfenden / Photo provided by interviewee

Readers have been asked to pay sums similar to or even exceeding the value of parcels sent from abroad to France despite the items being low-value gifts.

They include two readers charged €10 for receiving calendars sent by family.

This appears to contradict the usual French rule that items marked on customs paperwork as gifts, and under the value of €45, should be free of French import VAT and customs duties.

We are checking with La Poste and the French Douanes (service) as to possible reasons for these fees and any action that can be taken if you consider you have been overcharged.

If you have been affected by this please let us know at news@connexionfrance.com

Reader Sue Wolfenden, 69, from Gers, said that for years she has been receiving a home-made calendar from her daughter-in-law in New Zealand, including photos of her granddaughter.

This year’s calendar has just arrived and, despite a customs slip having been ticked by her daughter to show that it was a gift with an estimated value of 20 New Zealand dollars (€12.32) she said “the postman charged me €10 tax”.

She said she paid the fee because the gift was important to her, but “it seems ridiculous” and has not happened before in the 16 years she has lived in France.

“Does it effectively mean that I can no longer receive gifts from my children and grandchildren in New Zealand and Australia without paying virtually the value of the gift to the French state?”

Ms Wolfenden, a retired teacher, said she was given no breakdown as to what the charge involved.

“I’ve had charges on several parcels previously, on things ordered from the UK and I’ve decided to stop doing it but this was a present, from New Zealand, worth little anyway, but a lot to me.

“I coughed up but I felt particularly annoyed when the postman had gone.”

She added: “I wondered if Brexit had made them enforce some law they didn’t bother with before. I just don’t know.”

Reader David Covell emailed about a similar issue, saying he was charged an “out of proportion” €10 “customs fee” for a calendar worth £6, which had cost £5.95 in postage.

It was a gift from his daughter, who had completed the customs paperwork, he said.

A third reader, Michael Mew, wrote about what appeared to him a “random addition of customs charges”, after receiving a parcel containing two jumpers from his daughter, which she had valued at £20.

He said that “taxe 36” had been written in biro on the customs label, and this was the sum he was asked to pay.

Bizarrely, we have also received a report of a €13 charge for a letter sent from the UK.

What are the usual rules?

‘Documents’ such as letters should not incur any additional charges, and gifts valued at under €45 should be free of French import VAT and customs duties.

Above this, both may be chargeable on parcels from outside the EU and if the parcel is delivered by La Poste it pays the taxes at the border and then asks for them back from the recipient (the latter does, however, have the right to refuse the item, if they wish).

Customs officers do have the right to open packages and assess whether an item has been valued realistically, but we cannot see why this should be an issue, for example, with a €12 calendar.

In some cases where a delivery service has to carry out customs formalities as part of the delivery, it may add its own extra administrative fee, unless this has already been accounted for upfront (for example people ordering items on amazon.co.uk for delivery in France now incur an ‘import fees deposit’ to cover any additional money billed to Amazon due to customs formalities).

This is also the case for La Poste, which states on its website that it may charge the recipient an additional customs expenses fee for dealing with dédouanement (this is, settling VAT and duties at the border), which is €8, or €2-5 if you pay in advance online https://www.laposte.fr/comment-payer-frais-de-douane-colis-international

However we would not expect this to apply to delivery of a gift and many Britons have this year been able to receive small gift parcels without being billed for it.

Brexit: Receiving a gift send from UK to France