The EU must prioritise democracy 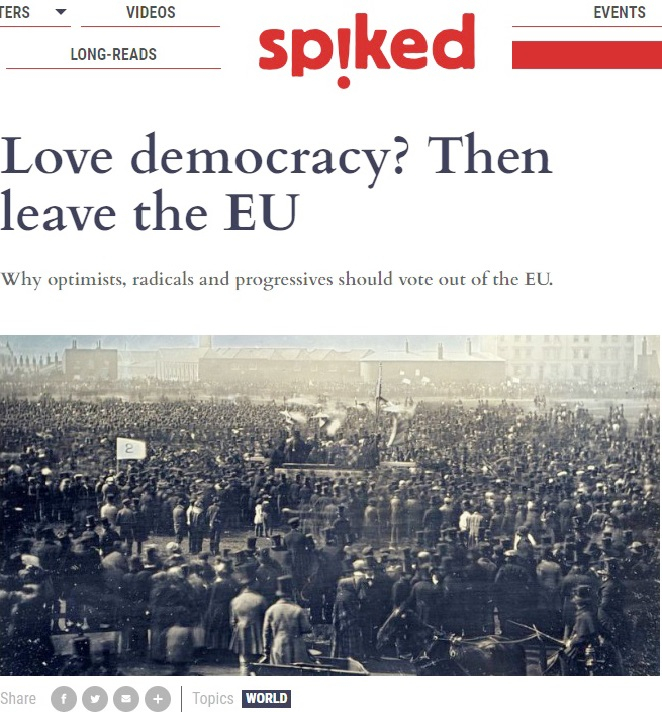 “Love democracy? Then leave the EU,” shouted a headline published in the run-up to the 2016 Brexit referendum.

The article failed to explain how this would happen but did raise an important issue.

If the EU is a democratic institution – the sum of 27 nation states run according to majority will – why has it so little to say about democracy?

In theory, Messrs Juncker, Barnier, Tusk et al answer to the people of Europe, who should be getting the message: “Love democracy, then love the EU.”

If the electorate is not convinced, improvement is needed.

First, the so-called “democratic deficit”, a key ingredient of the Brexit campaign.

Simply put, the charge is that the EU is either undemocratic because its leaders are not chosen by the people of Europe and cannot be sanctioned by them or, even, that it is anti-democratic and is willing to do whatever it takes to prevent the will of the people being expressed and heard.

The next challenge is populism, part of Brexit but also seen in elections in Italy, the Netherlands and France.

Populist politicians whip up support, often with “fake news” and by directing anger against a scapegoat such as the EU, which they say is responsible for all ills.

There may be genuine grievances behind it but it seldom leads to satisfactory solutions. It does damage without offering positive solutions.

Finally, there is the issue of authoritarianism and the dismantling of democratic structures, as has been seen in Hungary. If each member state cannot be relied on to take care of its democracy, how can the EU claim to be democratic?

If the EU is to be a truly democratic organisation, it will need to respond to these points in an active way.

If it had been more forthright with this in the run-up to the UK referendum, it might not have been perceived as undemocratic and the result could have gone the other way.

That leaves a gap in the middle, a “democratic deficit”, but not the kind Brexit supporters mean. The EU leaves it up to member states to organise their democratic procedures and institutions as they see fit.

In that sense, a member state is sovereign. The trouble is that this can conflict with a guiding principle of the EU: harmonisation of citizens’ rights.

A resident of Groningen should have the same rights as someone in Grenoble: the same democratic power to vote in or out his or her government and thus shape national policies that are transmitted to Brussels.

This largely holds true but there are exceptions. The most spectacular is that a Briton who moves to France, and still lives there 15 years on, loses the right to vote in the UK.

The legality of this was tested in 2000 by Harry Shindler, a Briton living in Italy. The European Court of Human Rights found that the UK state had the authority to choose who was and who was not to be consulted in a general election.

Mr Shindler and at least a million others are permanently disenfranchised at a national level, making them second-class political citizens in Europe. The legal concept here is revealing: the state chooses who to enfranchise and who to excommunicate. The right to vote should be inalienable, not at the gift of politicians and bureaucrats who happen to be in control of the apparatus of state.

It is true that in 2014 the European Commission urged those few member states which, like the UK, did not have “votes for life” to change policy.

It said cutting people off from the vote was “at odds with the founding premise of EU citizenship, which is meant to give citizens additional rights, rather than depriving them of rights”.

Then-vice-president Viviane Reding said it was “tantamount to punishing citizens for having exercised their free movement”.

Things have gone very quiet since then. The time is now overdue for the EU to prove it is democratic.

Democracy legitimises government: power flows up from the people to appointed officials and validates their actions that could otherwise be considered autocratic. It also provides accoun­tability. Politicians and bureaucrats must always be considered servants of the people.

Passing EU laws on this could be counterproductive, but there are alternatives.

It is time for a Europe-wide debate about the meaning of democracy in the 21st century, concluding with a charter, a set of guidelines for all governments to be judged against.

If we could agree minimum requirements for modern democracy, we could hold our own governments and the EU to account – and that would be a model for the rest of the world where people struggle to throw off oppressive regimes and create working democracies.

Is this what a charter for fairness should look like?

This draft charter proposes 10 standards by which any democratic institution – from local government to the European Commission – could be judged.

Every person in Europe must have the inalienable right to cast a vote for any public body that has power over them, whether at local, national or European level. If you move abroad, you gain the right to vote nationally in that country after five years of residency.

2. The power of the vote

The vote of any European must be as effective as anyone else’s, so the electoral system must conform to proportional representation. Abstentions must be counted and placed in balance with votes counted so as to measure the level of support expressed for the government.

If representative democracy is to be mixed with “direct” democracy (referendums) the criteria for each must be clear. In a referendum, the ballot paper must present the voter with at least two clear positive courses of action.

Democracy is a continuous process, not a one-off. Every democratic decision must have a time limit of its validity, after which it can be revisited.

Those who hold power must be accountable to all the people, as a whole and as individuals. There must be complete transparency. The system must be unambiguous and communicate in plain language, not jargon. The need to have recourse to lawyers should be kept to a strict minimum.

No organisation can be allowed to interfere with the chain of power between the citizen and the government.

Political parties must not be permitted to order their members to vote against their consciences or against the wishes of their constituents.

Government must be as close to the people as possible, not distant, invisible and unreachable. If most government is undertaken in capital cities, this must also be counter-balanced by effective local government in which the elected representatives are close to the people – as in the French commune system (though this has been diluted  in recent years by so-called “reforms”).

Governments must inform citizens of the mechanisms used to reach decisions. If citizens are not aware of the systems that govern them, this will be considered the fault of the government.

Democracy relies on communication of information and ideas and on debate.  The media is part of democracy. While it is not to be controlled by politicians, the political system must demand that the media carries out its proper democratic function.  The media must be responsible for correcting misinformation.

The words of the charter must be simple enough for every European to understand in his or her own language. It must be taught in schools. EU institutions can be held accountable to the criteria it contains.