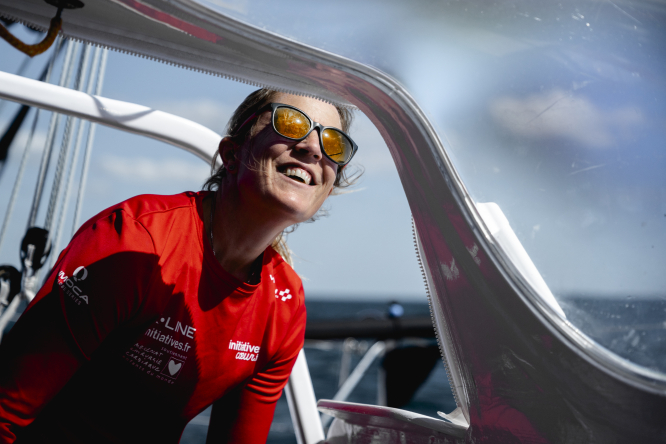 Ms Davies is one of six women competing this year, out of a total of 33 racers
By Connexion journalist

Briton Sam Davies is sailing the oceans in her third Vendée Globe, the solo round-world race dubbed “the Everest of the seas”.

It is the ninth edition of the gruelling event – sailors have died in previous races – which sets off and ends in Les Sables d’Olonne, Pays de la Loire.

In a first for the race, she will not be entirely alone at sea as her French partner Romain Attanasio is also taking part.

In 2004, Ms Davies, 46, moved to Brittany after being accepted into an elite sailing training team.

She and Mr Attanasio have a nine-year-old son. She said: “We’ve both done the Vendée separately and watched the other one sail off. Now we have the opportunity to have this adventure together.” She told Connexion she aimed to beat the race record of finishing in 74 days.

“If I sail as well as I have been, I should get a good result.”

'The bathroom is two buckets – one is the toilet and the other is the shower. We try not to get them confused'

She does not expect to win as her boat is too old, despite her team putting a lot of work into developing it.

“It would be hard to say I want to win this race because, in theory, I could sail a really good race and just finish inside the top 10. For me, I want to be able to do my boat justice and sail as fast as I know it can go."

“My parents have always had a boat. I’ve been lucky enough to grow up with sailing. It has been the number one leisure activity in my family ever since I was born,” she said.

She is racing as part of the Initiatives-Coeur team, which combines sport with humanitarian work, supporting the non-governmental organisation Mécénat Chirurgie Cardiaque.

It enables children with heart problems from countries where it is difficult to get operations to come to France, where they are hosted by a family and receive treatment.

“It’s an amazing charity to be involved with because it’s a lot of happy endings,” Ms Davies said. “Some kids come to France and they can’t even walk because they have been so sick. Then they get their operation and learn to walk again.

“It’s amazing to see how much it changes their lives just in the short stay they have in France.”

Ms Davies is one of six women competing this year, out of a total of 33 racers.

She does not expect to see a woman winner, as their boats are not equal to the newer ones of the favourites, but she hopes it will happen in future races.

Dame Ellen MacArthur came second in the 2000-01 Vendée Globe, breaking a world record and becoming the only woman to achieve a podium finish in the race.

“If we [the women] sail well this year, I’m pretty sure that will open doors. Then, in four years’ time, we will see a woman with a brand new boat and all the opportunities to have a winning project.” She added that she was physically and mentally ready, as she is “used to that crazy way of life”.

“It’s a different way of life and your body has to get used to it. Even sleeping uses a lot of energy because you are sleeping on a moving mattress.”

She described the facilities on the boats as basic.

“The bathroom is two buckets – one is the toilet and the other is the shower. We try not to get them confused.”

On the difference in how sailing is perceived in France compared to the UK, Ms Davies said it is a little less elitist in her adopted country.

“Wherever you go in France, if you see a piece of water, there will always be a group of kids being pushed out to sail. France is really into the adventure side of sailing, more than the competition side of sailing, which is maybe more in the English world."

“The people doing it aren’t just diehard racers. The top 10 are amazing competitors, but there are also the adventurers and the people who are going to sail around the world and who just want to finish.”