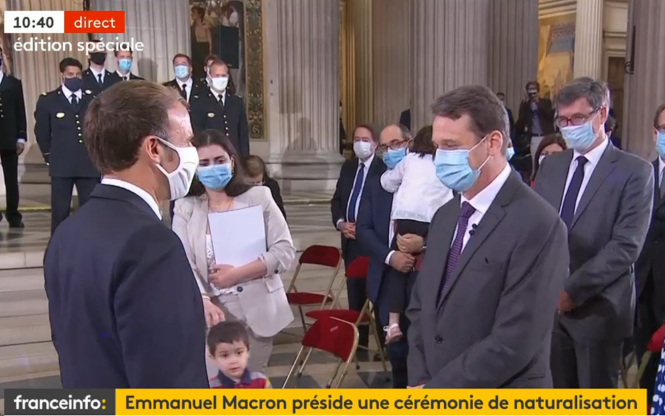 Matthew Ridealgh bumped elbows with the President, who congratulated him, and told him that he had been “French at heart [français de l'âme] for a very long time”.

Mr Ridealgh was born in 1970 and comes from Ilford in East London but has lived in France since 1993. He lives in Antibes and works for a telecoms company.

Also receiving their livret de naturalisation personally from Mr Macron were four other people, from Algeria, Libya, Peru and Cameroon.

In his address prior to the personal greetings, Mr Macron said: “Being French is never just an identity; it is a citizenship. There are rights that go along with it, and also duties – that is to say adhering to its values, to a history, a language, certain expectations that keep the Republic going because they depend on each one of us, at each moment. It’s a daily struggle.

“So together, let’s build this unified France than can overcome anything. And because, with their strength of spirit, certain people are today joining the Republic, and that you will be taking up the torch, we will be able to continue for a long time, with confidence, to say Vive la République! Vive la France!”

The citizenship ceremonies were part of this mornings celebrations of 150 years of republican government in France.

There has been a marked increase in Britons applying for, and obtaining, French nationality since 2016’s Brexit vote.