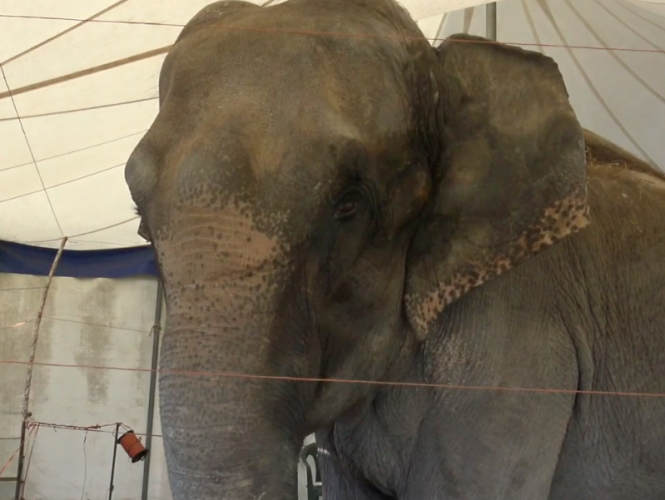 The elephant, aged 43, is suffering from multiple health problems due to being kept in captivity
By Joanna York

A caged elephant was found in Alès, Occitanie, earlier this month, after a volunteer from animal rights association One Voice raised concerns with police.

The animal, named Dumba, was living in a trailer under a tent when she was found on January 1, at 22:00. Although she is aged over 40, she was exposed to cold outside temperatures, and snow.

The trailer allowed only limited movement for the large animal. She was found with a head injury and other worrying symptoms, such as shifting her weight between her feet and knees, and heavy breathing.

Members of One Voice recognised the animal as Dumba – an elephant separated from her family when she was young and kept captive as a circus animal.

The animal’s owner is wanted in France and Spain for animal mistreatment. He fled France in 2018 to avoid charges, moving to Spain with Dumba, where he was charged again; prompting him to return to France and set up camp in Alès.

Muriel Arnal, founder and president of One Voice said: “We have seen multiple cases of mistreatment towards Dumba. People were allowed to take photos with her – which is banned – and sit on her legs. She was captive and isolated in a circus, which is unacceptable.

“Elephants are social animals who need to live in groups. They help and support each other until death. Dumba was alone in her agony.”

The association has been keeping track of Dumba for some time – she is known to have performed in the Cirque de Paris – but lost track of her in 2018, when she was moved back to Spain.

The lack of movement that Dumba experienced living in her small trailer means she is thought to be suffering from musculoskeletal pain, with repeated movements such as weight shifting and muscle wastage meaning her feet can no longer support the weight of her body.

Looking at video footage of the elephant Vet Dr Willem Schaftenaar told local news source France 3: “The physical state of this Asian elephant, which is clearly old, is very bad. There are clear signs showing she suffers from foot problems, she raises them alternately and moves them far from her head, under her body.

“The wear and tear on her head raises the suspicion that she often presses on this area. She is keeping her mouth open for a much longer time than is usual, which is often a sign of physical suffering.”

Hopes Dumba can move to sanctuary

One Voice has pressed charges against the owner for maltreatment and lack of care by a professional, with local courts in Alès. The group also hopes for a change in the law for ownership of non-domestic animals. It said: “If Dumba was a dog, her owner would already be banned from owning any animals.”

While circuses are still legally allowed to include animals in their acts in France a new law passed in last year means the practice will be gradually banned.

Dumba’s owner is now hoping to sell her, while One Voice has found her a place in a sanctuary. The group has launched an online petition to put pressure on authorities to help move her there.

But for now – 18 days after being found – Dumba is still living in the trailer.

13 hours ago
5
Covid France: Calls for AstraZeneca vaccines for over 65s