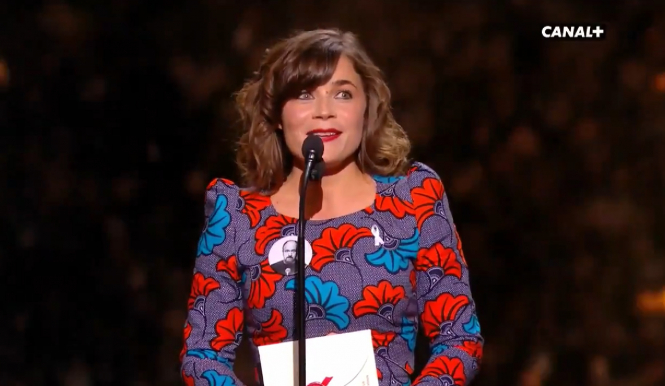 Ms Gardin's routine was described as "darkly humorous", and poked fun at the sexual harassment scandals affecting the movie industry in recent months
By Connexion journalist

In a “darkly humorous” sketch, Ms Gardin made a series of ironic jokes about the impact the Hollywood sex abuse and harassment scandals have had on the showbiz industry.

She joked: “From now on, it's clear, producers are not allowed to rape actresses. [But] what is not clear, is - do we, women, have the right to continue to sleep [with men] for roles? Because if not, well - we will have to learn our lines and go to auditions, and we don’t have the time, frankly."

Ms Gardin joined many other attendees of the awards ceremony in wearing a "#NowWeAct" white ribbon, as a sign of solidarity in the wake of the scandals and a symbol against violence towards women.

She also wore a badge bearing the face of American comedian and actor Louis C.K., one of the high-profile individuals who admitted to inappropriate sexual behaviour towards women early in his career.

Videos from the event suggest that most of the audience enjoyed the routine, but some - including actress Garance Marillier, shown below - looked less than impressed.

Former Hollywood producer Harvey Weinstein was the first powerful man in Hollywood to be accused of serious sexual assault, and has been accused of inappropriate advances, and rape, by over 80 actresses, including Rose McGowan, Charlize Theron, Uma Thurman and Salma Hayek.

Since then, many others have been accused by both men and women, including the actors Mr. C.K, Kevin Spacey, James Franco, Dustin Hoffmann, Steven Seagal, and many others.

Many of those accused have spoken out to admit the allegations and offer apologies for their actions.

Some - including Mr Weinstein, Mr Spacey, Mr C.K., and a host of others - have lost high-profile roles and projects in the wake of the incidents.

Social media campaigns such as the #MeToo and #BalanceTonPorc hashtags have also helped non-famous people contribute to the conversation, and speak in support of those affected.

The scandal continues as more and more women speak out, arguably helping to prompt a significant change in the culture towards speaking out about, and dealing with, sexual harassment.

The Césars ceremony itself took place at the Salle Pleyel in the 8th arrondissement in Paris, on Friday March 2.

Actress Vanessa Paradis opened the ceremony with a speech explaining the meaning of the “#NowWeAct” white ribbon.

Winners included 120 BPM for best film, Albert Dupontel as best director for his film Au Revoir Là-Haut; Sara Giraudeau as best actress for her role in the film Petit Paysan; and Antoine Reinartz as best actor for his role in 120 BPM.

Of those, Huppert especially has previously been vocal about the scandals.

Earlier this month, she said that the #MeToo campaign "should have happened sooner", and offered her "sympathies and hopes" to the women affected.

She added: “Everything that has been said - since this began several months ago - should have been said."