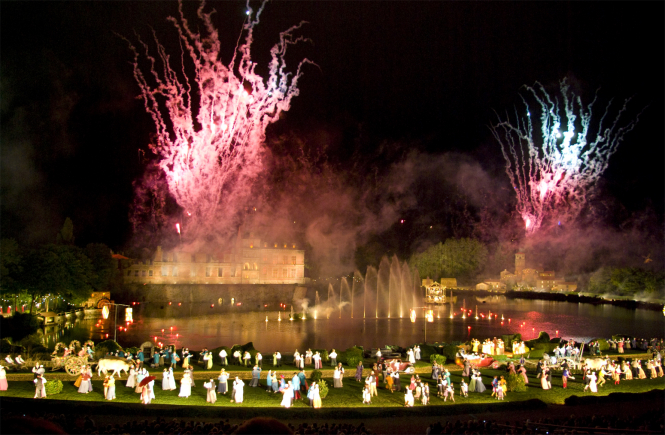 La Cinéscénie event can accommodate up to 13,069 guests in normal circumstances.
By Joanna York

On Saturday, August 15 theme park Puy du Fou was granted permission by the prefecture in Vendée (Pays de la Loire) for a nighttime event with up to 9,000 visitors.

Gatherings of over 5,000 people are banned until October in France, with some exceptions, in order to limit the spread of Covid-19.

The prefecture justified their “exceptional exemption” for the event, citing a law from July 10 that, from August 15, gives prefectures the right to grant exemptions to the 5,000 people gathering limit.

In a statement, published on Twitter, the prefecture said that indicators showed Vendée currently has a low rate of Covid-19 transmission.

In addition, strict health guidelines were put in place for the event, such as controlled entry and exit points for crowds and 4,000 seats left empty to allow for social distancing.

The 9,000 visitors were separated into three groups, no larger than 5,000, and separated by plexiglass screens.

La Cinéscénie event, which is a seated performance, can accommodate up to 13,069 guests in normal circumstances.

Opposition condemn favouritism and danger of opening park to crowds

Elected officials on the left have taken a different view, as it is known that President Emmanuel Macron is friends with Philippe de Villiers, founder of the Puy du Fou theme park.

The opposition has accused the President of intervening personally to grant the park a “special favour”, which the President’s office has denied.

Bastien Lachaud, La France Insoumise representative for Seine-Saint-Denis (Ile-de-France) Tweeted “Since Macron personally intervened Puy du Fou has benefitted from special favours. The friendship of the president with the extreme right is being put before the security of French people and before Covid-19 prevention!”

Olivier Faure, secretary of the Parti Socialist, and vice-president of the Senate David Assouline also spoke out against the event on Twitter. The latter decried the fact that the park was allowed to open as “like sticking two fingers up at the world of culture.”

In France, theatres and concert halls have remained closed since late February to stop the spread of Covid-19. Many festivals have also been cancelled.

The President’s office has denied accusations of favouritism. According to a report in news source Le Journal du Dimanche, the president was “surprised” by the decision to open the park.

Minister for culture Roselyn Bachelot also defended the decision to open the park in an interview with news source Le Parisien, saying said the prefecture in the Vendée opened the park as the local health situation was good enough to do so.

She added: “Puy du Fou does not compare to concert halls and cultural festivals. The capacity [of Puy du Fou] is enormous and can allow us to consider welcoming 9,000 people while respecting social distancing measures.”

Multiple controversies for the park since deconfinement

Puy du Fou was the beneficiary of a previous exemption in July, when it was given authorisation to put on a show for 12,000 spectators, divided into groups of 4,000 and separated by plexiglas screens.

The opening date for the park as confinement measures were lifted was also the subject of controversy. When it was confirmed the park would reopen on June 11, founder of the park Mr de Villiers shared a personal SMS from the President giving him the green light to reopen, a gesture many interpreted as favouritism.

While the most recent exemption was only given for the show on August 15, future shows have been planned at Puy du Fou for August 21 and 22.

The local prefecture says they will go ahead if a “revaluation of the health situation” is favourable.