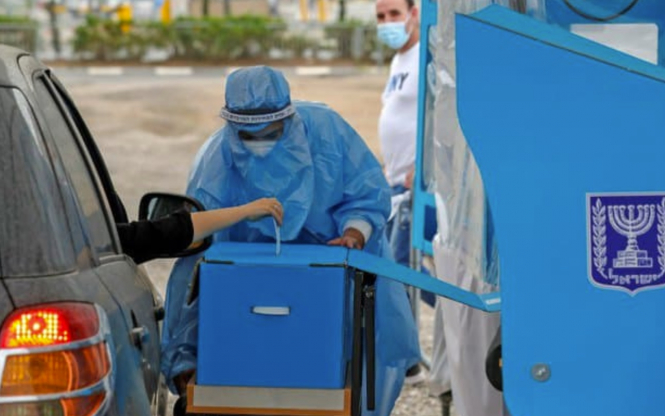 At France's first ever vaccidrive, people can get vaccinated without leaving their cars
By Hannah Thompson

Here are some of the updates on the changing Covid-19 situation in France that you may have missed.

France has not closed its borders with Brazil, despite its variant having killed more than 66,000 people in Brazil in March alone - the highest toll since the start of the pandemic.

Germany and several other countries have closed their borders with Brazil and South Africa due to concerns over the new variants.

Currently, around 50 people enter France from Brazil each day. France requires a negative PCR test from the previous 72 hours, recommends a seven-day isolation period upon arrival, and antigen tests.

Expert infectologist Professor Gilles Pialoux has said that these conditions are not sufficient, and called for a longer quarantine period and antigen tests to be carried out on arrival.

“We must imagine the worst-case scenario, which is that someone is very contagious but they don’t know it, because they have done everything the government recommended. We can’t carry on like this. The Brazilian variant is no joke.”

Transport Minister Jean-Baptiste Djebbari on Monday defended France’s decision to not close borders, saying that high court le Conseil d'État had said that “French citizens and residents must, in the name of free movement, be permitted to continue entering” the country.

The first “vaccidrive” (drive-through) in France has opened today, Tuesday April 13, in the car park of an emergency clinic near Montpellier in Hérault.

Members of the public can receive their vaccination without having to get out of their car.

Laurent Ramon, director general of organisers the Cap Santé group, told BFMTV: “It’s a bit like staying at home” in contrast to a vaccination centre “where you mix with other people”.

He said that drive-throughs were “less stressful and save time”.

The first centre hopes to vaccinate “almost 1,000 people per week per lane”, he said, but more could open quickly.

He explained: “We had the idea on March 18 when the US reached 100 million vaccinations. We saw that there were multi-lane [drive-throughs] where people were staying in their cars. When you see a good idea, you have to act on it.”

A row over the use of the AstraZeneca vaccine has broken out in the department of Moselle, after the local health agency l’Agence Régionale de Santé (ARS) decided to continue using the AstraZeneca jab.

This is despite health authority la Haute autorité de santé (HAS) recommending its use be stopped in Moselle due to the spread of the South African variant.

The AstraZeneca vaccine is not considered to be effective enough against the South African variant of the virus, which represents around 35% of cases detected in the department in March, the HAS said.

On Friday, April 9, the HAS recommended that areas most affected by the South African variant should “continue to prioritise the use of” mRNA vaccines, especially Moderna and Pfizer/BioNTech.

But on Sunday, April 11, the Agence régionale de santé (ARS) Grand Est and the Moselle prefecture published a joint statement saying that the “vaccination campaign, as it has been since February” would prioritise some mRNA vaccines, but would continue to use the AstraZeneca jab too.

The statement said that the South African variant had grown “by more than 55% in a month” and “now makes up 30% of cases” in Moselle - a lower figure than that cited by HAS.

Dr Laurent Dap, OM president for the department, told Le Figaro: “It’s incomprehensible. People are calling their doctor all day long, and we are overrun.

“It’s as though they are continuing as before, changing nothing. We must take into account the HAS recommendation.”

He said: “It’s a joke to vaccinate someone with AstraZeneca [when we know] it is not effective [against the South African] variant.”

The incidence level (the number of cases per 100,000 inhabitants) has dropped significantly in the Alpes-Maritimes in the past few days, suggesting that lockdown and vaccinations may be having a positive effect.

The latest figures from Santé publique France for April 12 put the figure at 284.

This is the lowest seen since December 13 (270). At the peak of the latest wave of the epidemic on February 18, the incidence level for the department was 642.

The incidence drop was first noted soon after partial lockdown measures were introduced at the weekends from the beginning of March. The figures dropped even more after March 24, just over a week before the nationwide lockdown was announced.

The incidence has dropped by more than 100 in just two weeks. This means that for the first time in several months, the incidence level in Alpes-Maritimes is lower than the national average, which is currently 343.

The incidence rate is an important figure to track, as it is a major indicator of the state of the epidemic and the pressure on hospitals. Yet, so far, hospital pressure in the department is still acute.

Figures from the ARS show that there are 106 Covid patients in intensive care in the department, representing 81.4% of available intensive care beds.