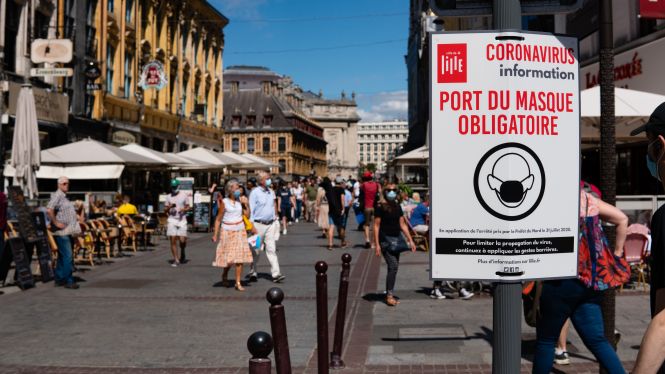 The fourth wave of the Covid-19 pandemic in France is set to peak in the next few days but hospitalisations are expected to stabilise afterwards Pic: Di Vincenzo / Shutterstock

The fourth wave of the Covid pandemic could peak in France “in a few days” and the country will likely avoid a new lockdown this autumn, the health minister has said.

Olivier Véran told BFMTV: “This is what the Institut Pasteur is telling us: we could have reached the peak of intensive care in a few days, and then see a stabilisation in admissions and discharges from intensive care, meaning we will avoid saturation of hospitals, and then we hope we will see a drop [in admissions].”

Mr Véran was also relatively positive on the subject of possible future lockdowns.

He said: “I don’t want us to have to lockdown again. I think we have the means to avoid another lockdown. Which is not the case in all countries. Maybe in three or four months, Covid will have mutated again, and I’ll be wrong.

“You will invite me back on here again and say, ‘Look, he was wrong again’. But that doesn’t matter. Knowing what I know today, I will say that we have the means to protect ourselves.”

Hospitals in Marseille have been particularly affected by the fourth wave, the Assistance Publique - Hopitaux de Marseille (AP-HM) hospitals group has warned.

The head of intensive care at the Timone hospital told BFMTV: “The AP-HM, in terms of hospitalised patients, is effectively one of the most-impacted CHUs in mainland France.”

Even so, hospitals have been significantly less saturated during this wave than during previous rises.

Leading epidemiologist Arnaud Fontanet told France Inter: “It’s a balance that we need to keep an eye on. At the beginning of July, it was very difficult to see where Delta [the variant] would take us but in the end, vaccination is progressing well.”

In the past five to six days, there has been a slight drop in the number of Covid-19 cases counted daily nationwide.

Yet, the health minister warned that people arriving home from holidays, and the restarting of school, could cause the situation to worsen.

Government spokesperson Gabriel Attal said: “Let us be clear, there is a slight drop, but it’s not a sea change.”

Professor Fontanet added: “We will have some disrupting elements: the return to school, university, work...and maybe colder weather, like last year, which was the origin of the second wave starting.”

Recent models from the Institut Pasteur suggest that “half of new infections” could be among school children as they return to class, as children aged under 12 are not vaccinated. Vaccination for this age group is not expected to begin until at least 2022.

However Mr Veran said that the current situation was less precarious than in previous waves.

He said: “The impact of vaccination...the health pass...and our capacity to test the public” means that “we can look ahead of us with less worry than last month”.

It comes as Mr Attal announced that 85% of health professionals in retirement homes are now vaccinated. This is a rise of 20% since President Emmanuel Macron announced that vaccination would now be mandatory for people in such professions.

Professor Fontanet has also recently said that he estimates that 80% of the population in France is now immunised to the virus. This means that lockdowns could be avoided in future, if people continue to be careful, he said.

He told Les Echos that France could possibly look forward to a “less difficult autumn” this year compared to last year.

He added: “60% of the population is entirely protected, and 70% have had first injections. So even though we are living in a fourth wave, a not-insignificant proportion of the public in France has already been infected, probably a quarter.

“[This means that] more than 80% of the population is immune to SARS-Cov-2, so control measures are a lot more effective. This immunity ‘reservoir’ will allow us to avoid new lockdowns, and it will allow us to have a less difficult autumn than what we’ve been living through until now.”

Professor Fontanet warned that France was nonetheless still behind on vaccination compared to some countries.

He suggested that schools should follow rules such as airing out rooms, wearing a mask, using “air purifiers where ventilation is not possible, and testing primary pupils twice a week to avoid a rebound of cases come September.