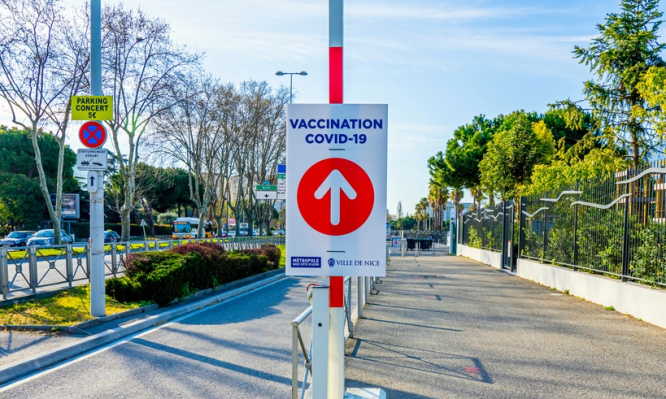 The ‘health pass’ effect of boosting vaccination uptake is the result of President Macron’s announcement to extend its use, the Institut Pasteur says Pic: Elinaxx1v / Shutterstock

The ‘health pass effect’ is prompting more people in France to get vaccinated, which could mean that fewer restrictions will be necessary come September, new figures from the Institut Pasteur show.

The medical institute had predicted that the virus would evolve negatively between now and the autumn, that vaccination was not at sufficient levels, and that new restrictions or even lockdowns could be needed as a result come September.

But the imminent extension of the health pass – including its use in restaurants, cafes, TGVs and other long-distance travel – has had a noticeable impact on the number of people getting vaccinated, the Institute said.

In its latest epidemic model from July 27, the Institute suggests that the number of people set to be vaccinated by September – if it stays at the current rate of 684,000 per day – may limit the peak of the current fourth wave.

The new figures show that there will be 2,500 daily hospitalisations for Covid-19 due to the Delta variant. This is half as many hospitalisations as had been predicted in the Institute’s report of July 9, which was published three days before President Emmanuel Macron announced the extension of the health pass rules.

In the weeks before July 9-12, the average number of vaccination doses was at 500,000 per day, and the trend was decreasing, in contrast to now, figures showed.

This was not high enough for the country to reach herd immunity or to guarantee that there would be no further restrictions come autumn, according to the Institute’s mathematical calculations and predicted scenarios.

These predictions took into account the efficiency of the vaccines, the vaccination coverage, the age of recipients, and the increased contagion of the Delta variant.

But now, the data has changed, the Institute said, and dubbed the shift the ‘health pass effect’.

The new report reads: “The combined effect of the vaccination acceleration and a reduction, however small, of the transmission rate (of the Delta variant) could have a significant effect on the size of the fourth wave.”

The rate of transmission has been 10% lower this week compared to that observed over the previous three weeks, and daily hospitalisations are at 1,800 compared to the 2,500 previously seen - a drop of 28%.

Researchers added: “It is therefore essential that this vaccination acceleration continues, with a massive take-up among the population; and that transmission drops across the general population, mainly as a result of the maintenance of barrier gestures, wearing a mask, and using the health pass.”

Does this mean no more restrictions or lockdowns in autumn?

Jean-Stéphane Dhersin, epidemic modeller at research institute le CNRS, told HuffPost that it was difficult to say for certain.

He said: “The spread of the SARS-CoV-2 virus is difficult to guess, and the dynamic of the epidemic can change quickly. Human behaviour is unpredictable.

“In the Pasteur model, acceptance of the vaccine and the speed of vaccination don’t change over time,” he said. “However, these factors have changed in the past. Blood clots caused opposition [to the vaccines], but the health pass and Delta variant caused more people to sign up.”

Health Minister Olivier Véran yesterday said that the country is aiming to “do better still” on vaccination, and that “three million appointments” would be made available for booking within the “next 10 days”.

France is currently approaching the 50% mark of fully vaccinated adults, an equivalent of more than 33 million people. Yet, disparities have started to appear across age, socioeconomic and geographical lines.

This, coupled with the small but significant numbers (16%) who say they do not want a vaccine, could stop the country from reaching the ideal 90% vaccination coverage among 18-59-year-olds.

160,000 protest against health pass rules in France
People vaccinated early struggle to get QR code for French health pass
How will the French react to the new Covid health pass?
Covid 4th wave France: Check mask-wearing and other rules in your area