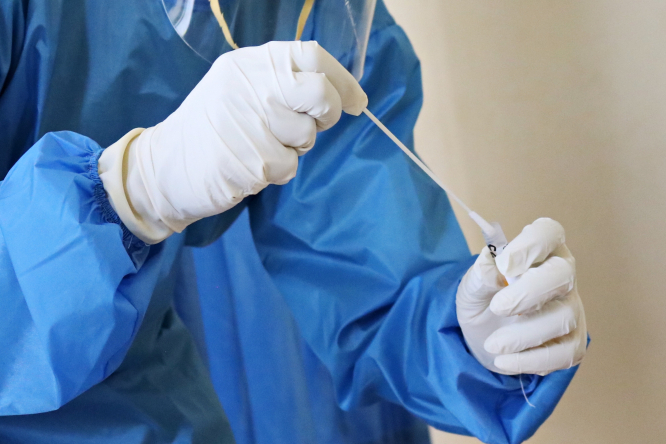 Launched by the Ministry of Education, a Covid-19 screening programme is underway in schools, collèges and lycées across France as children return from the winter holidays. It started on February 22, in schools in Zone A, and was rolled out to Zone C establishments as students returned on March 1.

The intention is to ensure - if there is a need for stricter health measures and perhaps even a third period of lockdown - that schools 'will close last'.

Education Minister Jean-Michel Blanquer said France had "the means in terms of tests and logistics" to reach "the objective of 300,000 tests per week by mid-March" for all French schools.

He also announced "1,700 mediators" would be recruited to “support staff carrying out saliva tests. These support staff will be suitably qualified "students of medicine, pharmacy (...)".

But the campaign has raised questions within the teaching community and among parents. We explain how it will work.

Are these tests painful?

No. Saliva tests are nothing like nasal swabs. Pupils will be asked to spit into a bottle, or - for children under the age of six - it will be collected in a pipette from inside the mouth.

No. Pupils will be tested on a voluntary basis Secretary of State Adrien Taquet said in early February on Franceinfo. Parents will be asked to give their consent before any tests are carried out. The schools will then tell the laboratory how many tests are required.

How accurate are the tests?

According to the Haute Autorité de santé, they "have a satisfactory sensitivity of 85%, compared with 92% for nasopharyngeal RT-PCR tests".

Will the identity of any children who test positive be revealed to the schools?

This is not planned, according to the Ministry of Education. The only information schools will receive from the laboratory is the total number of positive cases. It will be up to the families to inform the school in case of a positive test.

When can they be carried out?

There are limitations - samples must be taken more than 30 minutes after eating or drinking, brushing teeth or using a mouthwash.

As long as a sufficient amount of saliva has been collected samples must be at the laboratory within five hours and analysed within 24 hours.

How long do results take to come through?

Similar to the more painful nasal swab tests, results can be back within 12 to 24 hours.

Will teachers be involved in taking samples?

Teachers were concerned that they would have to carry out testing when they are not medically qualified, but the answer is no. Some 2,000 doctors and nurses will take the samples, supported by 1,700 qualified 'mediators'.

However, teachers "can volunteer to help supervise children, or with any form of administrative follow-up," Mr Blanquer said.

Why are children being asked to take these tests?

Massive and regular testing in schools will make it easier to isolate positive cases and inform contact cases.

Saliva samples are suitable for screening "on a large scale in a closed population, such as in schools, colleges, high schools, universities, health establishment staff or Ehpad", according to the Haute Autorité de santé.

They also allow samples to be taken repeatedly, easily and painlessly.

What happens in schools if positive tests are returned?

The rules for contact tracing in schools changed from early February. Identifying and isolating contact cases is automatic as soon as a single case is confirmed, compared to three cases previously.

In maternelle, all pupils - who do not have to wear masks - are considered contact cases if a positive case is detected.

Classes are automatically closed as soon as three confirmed cases are identified, whether in primaire, collège or lycée.

Read more: Daily updates on the situation in France