Crêpes and history: The ancient roots of Chandeleur 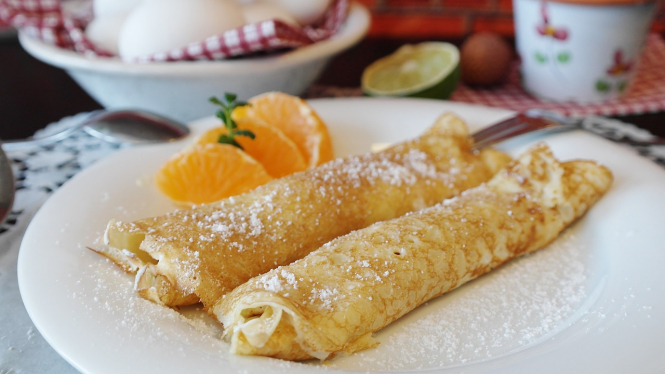 And yet, while a recent study showed that 84% of the public planned to have crêpes today (Friday February 2), surprisingly little is widely known about the festival’s origins, whose date is fixed at exactly 40 days after Christmas Eve (December 24).

In Christianity, the festival - whose name comes from “Festa Candelarum” (“candle festival”) in Latin - signals the commemoration of the “Presentation of Jesus at The Temple”.

This was seen as a key event in Jesus’ early life, and is described in the New Testament Gospel of Luke as part of a “purification rite” extended to first born babies.

Yet, Chandeleur is one of several festivals that mixes Christian roots with Pagan rituals and popular culture, also including Mardi Gras, Carnival, and Lent, all of which are related to Easter and the life of Jesus, but have their roots before Christian times.

Chandeleur is thought to be linked to an old pagan fertility ritual, which was then adopted into Roman times and became known as the “festival of Lupercales”, in honour of Faunus, god of farm animals and fertility.

Held at the beginning of February in anticipation of the coming springtime, Chandeleur is also thought to have links with the Celtic-Gaelic festival of Imbolc, another fertility celebration that saw people celebrate with parades and burning torches.

It later became a Christian festival, with the fertility element associated with Christ as a baby.

Crêpes themselves are thought to have their own meaning too, with their yellow and round appearance recalling the Sun in the sky, in celebration of longer days and more daylight coming for Spring after the long, dark months of winter.

At this time of year, days are lengthening rapidly, with sunset pushed back by three extra minutes every day, gradually adding more daylight time until the longest day; the June Solstice, around June 20-22.

Eating crêpes is therefore seen in popular culture as an homage to the renewal of nature, the cycle of the seasons, and as welcome to Spring.

In the 5th century, it was also thought that crêpes were made using extra flour, to signal future prosperity throughout the year.

Prosperity rituals about crêpes in France include holding a coin in one hand, and flipping your pancake in your pan in another - and if it falls back into the pan without folds, the household will have a prosperous year.

A slightly less-hygienic ritual included keeping the year’s first pancake in a cupboard, “to increase its chance of attracting financial luck”.

Despite the long-held association with crêpes, however, reports suggest that many people forget about Chandeleur until right before it arrives - often reminded only by pancake makers or supermarket producers selling pancake ingredients (such as eggs or sugar) - according to the sugar company Béghin-Say.

“It is one of those festivals that we have to ‘reactivate’ every year, otherwise customers do not think about it,” explains the company’s marketing director to news source Linternaute.

Crêpes are usually eaten with the traditional accompaniment of cider, with different kinds recommended depending on your crêpe topping - chocolate with pear cider; pink cider with jam; and perhaps dry cider with an apple filling.

Other rituals for Chandeleur include lighting many candles and showing them at your windows, to recall the “light of Christ” and the “purity of the Virgin Mary”.

Some churches - depending on the calendar they use - celebrate Chandeleur on February 14, and in some villages in France, the tradition is to hold it in the middle of Lent (with people taking a break from their fasting or light eating that day) alongside other rituals such as dressing up for Carnival.