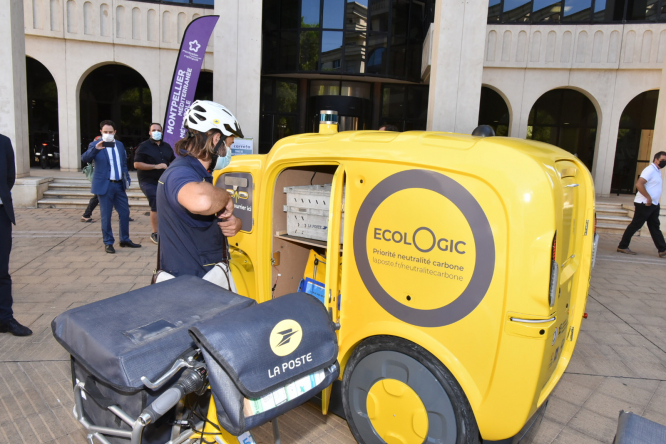 If you spot a yellow vehicle without a driver in the southern city of Montpellier, then it is being tested by La Poste for deliveries Pic: Hugues RUBIO

Visitors to Montpellier may be surprised to see driverless delivery vehicles moving around in the city centre. If it is yellow, it is a vehicle used by La Poste or, if white, one used by transport firm STEF.

Postal staff will use it to carry heavy parcels and letters while they ride alongside on a bicycle. They will go to and from the vehicle to fetch and deliver the post. STEF will use it to take deliveries of fresh food to restaurants, bars and shops.

At present, the vehicles – known as droids – are only occasionally on the streets and are empty. During the final phase, they will be put to real work, to see how useful they are to the companies and to find out the reaction of local residents.

They will start in the Antigone area of the town and then move to the historic centre.

The vehicles have been made by TwinswHeel, from Cahors, Lot, which designs and manufactures vehicles to carry heavy loads in urban settings.

The biggest can carry weights of up to 500kg. The experiment, called Caretta, is one of 16 approved by the government to test use of autonomous vehicles.

Decline in letters sees La Poste diversify: What else does it do?