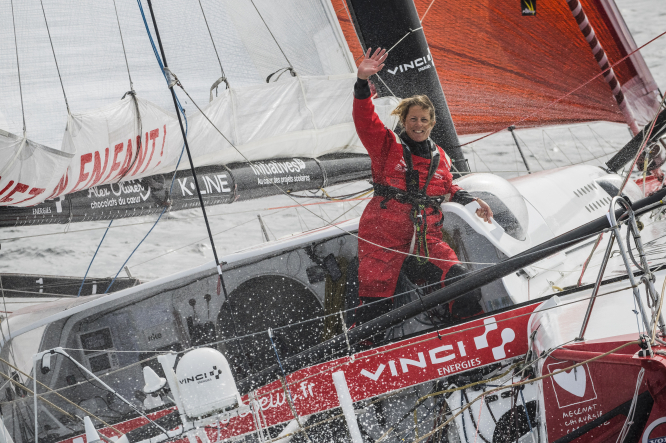 Ms Davies is competing in the Vendée Globe, which takes place every four years and starts and ends in France
By Thomas Brent

Ten days after Sam Davies, a British sailor based in France, set off on a solo, round-the-world, non-stop sailing race, she has already raised enough money to save 17 children.

Ms Davies is competing in the Vendée Globe along with 32 other competitors. The event takes place every four years and starts and finishes in Les Sables d’Olonne in the department of Vendée.

Ms Davies is racing for the Initiatives-Coeur team, which combines sport with humanitarian work in the form of supporting the non-governmental organisation Mécénat Chirurgie Cardiaque.

So far during the race, €210,479 has been raised. The organisation is hoping to raise enough money to save 60 children by the end of the race, which will likely last a little over two months.

The charity has raised enough money to save 176 children since 2008.

This year’s Vendée Globe set off on November 8. Racers are aiming to beat the current record of 74 days.

Sneak preview: The Connexion spoke to Ms Davies before she set off to get her thoughts on the race. A full interview will be published in our December print paper. She told The Connexion conditions on the boat are basic:

“The bathroom is two buckets, one is the toilet and the other is the shower. We try not to get them confused.”