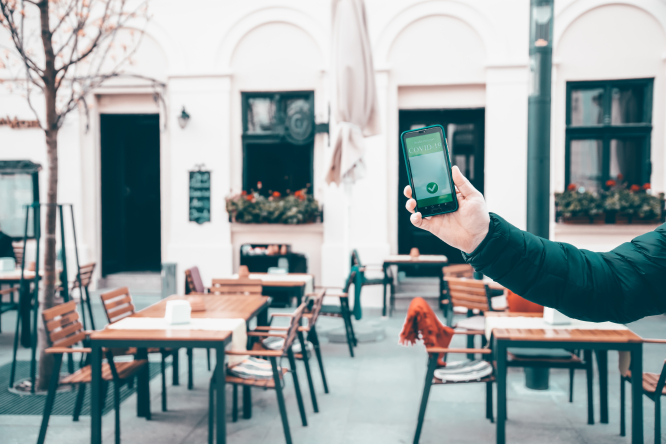 Two restaurateurs in France who participated in a four-day trial to see how the Covid health pass (pass sanitaire) will work in restaurants report mixed feedback with one praising an easy system, the other saying it wastes staff time and annoys clients.

France is set to make its health pass a requirement for all adults to enter restaurants, cafes, bars, etc from August 9, subject to approval from France’s Conseil constitutionnel, which will be announced tomorrow (August 5).

The health pass is proof of being fully vaccinated against Covid-19, proof of a negative Covid test taken within the past 48 hours, or proof of having been positive with Covid 11 days to six months before

In view of this, the préfet of the department Territoire de Belfort (Bourgogne-Franche-Comté) organised a trial to see how local restaurants will cope with using the health pass.

The trial involved four restaurants and ran between Thursday July 29 and Sunday August 1.

“We had no problems. Our customers reacted well, and there were no difficulties,” he told The Connexion.

He said he did not have to employ any extra staff and it was relatively easy to check people’s documents, including on paper or through France’s Covid app TousAntiCovid.

“Our customer base is not really young people, it is more people of a certain age who are already vaccinated,” he said.

“So, from the point of view of my customers, there was no problem.”

He did not want to say if he thought using health passes in restaurants was a good measure, but said what was important was that as many people as possible get vaccinated, in France and around Europe.

“It has worked well with us,” he said.

“But I know that other establishments, like bistros or bars, may have more problems.”

One such restaurant owner who reported having a negative experience from the trial was Francis Luczak, owner of La Petite Charrue in Vauthiermont.

“It was difficult to put in place for our staff, it was badly understood by our customers, it was a source of tension for everyone. It did not go well,” he said.

The biggest issues, he added, were that it wasted his staff’s time and caused animosity with customers.

“There was a media article about the trial and we were flooded with insults and comments that were not very nice. It was very negative,” he said.

He said he had not had fewer clients than normal during the trial, but believes that if the health pass law comes into effect for restaurants from next Monday (August 9), it will definitely affect the number of customers he has.

“We hope that the pass sanitaire will not be required in restaurants from Monday and that the Conseil constitutionnel will scrap this law tomorrow. We will have to see.

“We are in favour of welcoming everyone in our restaurant. It should be up to each restaurant owner to make the decision [on who can enter] and take responsibility for it.

“If the number of vaccinated customers coming to the restaurant is not enough for us to get by economically, then we will have to close,” he said.

French hospitality union Union des Métiers et des Industries de l'Hôtellerie (UMIH) has called on the Conseil constitutionnel to scrap the law requiring the health pass to be shown in outside dining areas and on terraces.

“The UMIH has consistently stated that the use of the health pass on our terraces would be unenforceable by professionals, but also manifestly contrary to the principles of necessity and proportionality justifying the restriction of the most fundamental public freedoms,” the body wrote in a press statement published July 28.

France’s health pass is already required to enter museums, theatres, cinemas, public swimming pools and some other venues that can host over 50 people.

The Conseil constitutionnel has the final word on the specifics of the extended use of the health pass in restaurants, cafes, bars, hospitals (excluding urgent care), care homes and long-distance transport services, such as TGV trains.