Eight changes for residents in France from October 2021 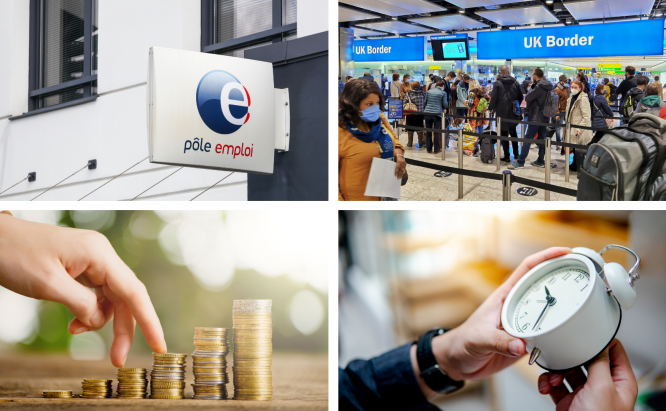 The month ahead sees minimum wage increases, new rules for calculating unemployment benefits, and extra regulations for travel to the UK, among other changes for people in France.

A new decree published today (September 28) has extended the deadline from October 1 to January 1, 2022. You can read more about the extension here: France extends Brexit residency card deadline amid backlog

Britons who were living in France by the end of 2020 and who therefore benefit from the Brexit Withdrawal Agreement were by French law meant to hold one of the new WA residency cards by October 1. Thousands though were still awaiting cards after applying.

2. The clocks go back by one hour

This autumn the clocks will go back by one hour on the night of October 30-31. The change officially happens at 3:00 (French time), with the clocks going back to 2:00, meaning people in France will gain an extra hour in bed.

2021 was supposed to be the last year that the clocks changed in France due to new rules voted in by EU member states.

However, the Covid health crisis has moved discussions over changing the clocks in spring and autumn off the agenda, and for now no future changes are planned.

3. Transport rules changing for travel to UK from EU

From October 1, visitors from France will need to show a passport in order to enter the UK – other documents such as French identity cards will no longer be accepted as valid for travel.

Passports need to be valid for the duration of a stay in the UK.

The rules are a result of Brexit negotiations and will apply to both business travellers and tourists.

However, EU citizens who are residents in the UK under the Withdrawal Agreement can continue to use identity cards to return to the UK until at least December 31, 2025.

From 04:00 on October 4, fully vaccinated travellers from France will not need a PCR or antigen test before travelling to the UK, and will be able to use their proof of vaccination certificate only.

Travellers to the UK (even UK residents and/or citizens) are still required to take a Covid test on day two of their stay in the country. All passengers will still have to complete a passenger locator form in the 48 hours before arriving in the UK.

However, from late October, the UK government is set to downgrade the level of test needed from PCR to antigen, meaning they are expected to be cheaper.

Read more: When and how are Covid test rules changing for France-England travel?

4. Changes to Covid rules in France

Several Covid rules are changing, including:

The minimum wage (Smic) will increase by €35 gross per month from October 1.

This comes as inflation of 2.2% has increased costs for essential products including gas, electricity, and food in France.

Read more: Minimum wage in France is rising – what is the average salary now?

Government rules changing how unemployment benefits are calculated will come into effect in October.

The government has said that the new rules will improve conditions for workers who alternate between short contracts and periods of unemployment, in the context of economic recovery from the health crisis, which has led struggling sectors to rely on short contracts more heavily.

However, a study by Pôle Emploi earlier this year found that for some 1.5million jobseekers it would result in around 17% less aid per month over the first year of the new rules. At the same time, the average length of entitlement to benefit would lengthen, from 11 to 14 months, it said.

The government initially wanted the new rules to come into place in July 2021, but the Conseil d’Etat rejected the idea on the grounds that the economic situation did not merit the change. The government has since pressed ahead with a second proposition for the same plans, citing a “sharp rebound in employment in May” and rising salaries in the private sector.

The government has promised ski industry bosses it will clarify by October 15 whether or not it wants health passes to be used for ski lifts, and how this would be checked

From October, housing benefits (aide personnalisée au logement, APL) will increase for the first time in several years, by 0.42%.

However, the real impact will be relatively minimal. For example, someone who receives €150 in APL will see this amount increase by 63 centimes.

People who rent property in France may be eligible for APL, depending on the amount of rent they pay and their income.

To check if you are eligible and how much financial aid you could receive, use the government's online calculators available here.

*Article amended 28/09/2 with regard to three points. Firstly, to include details of an extension to when Britons must have a WA residency card. The original article stated that travellers from France to Scotland and Wales will still require a pre-departure Covid test from October 4; this has now been changed to reflect the latest travel rules for those countries. Details about passenger locator forms were also added.

14 hours ago
5
Shortages of goods in France: What is expected in the months to come?