Eight updates for air, ferry and rail travel to and from France 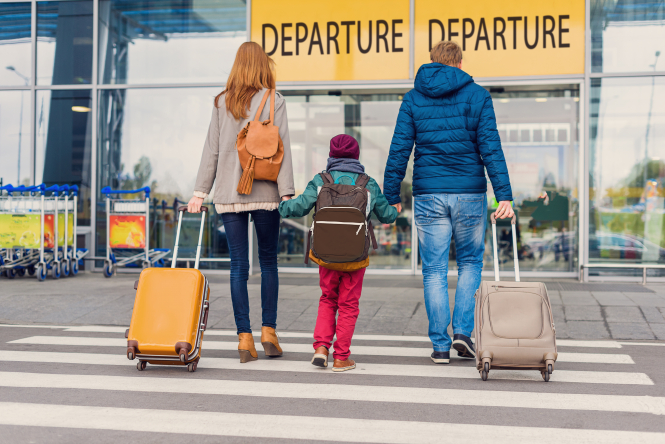 International travellers will be allowed once again to enter the US from November 8 if fully vaccinated or under certain conditions Pic: Olena Yakobchuk / Shutterstock

We look at some of the travel news for journeys to, from and around France, by air, rail and sea, that is occurring this week.

New rules for EU travellers to US

The US government has outlined the entry requirements for children and vaccinated adults travelling to the country when its borders reopen next month.

It was recently confirmed that US borders would be reopening to fully vaccinated international travellers on November 8, for the first time since March 2020.

Under-18s and people with certain medical issues will be exempt from vaccination requirements but must still provide a negative PCR or lateral flow test taken in the three days before travel if over the age of two, as must vaccinated adults.

Over-18s travelling from Europe to the US once its Covid travel ban lifts will be required by the airline to prove their vaccination status before they board the plane.

Airlines must confirm that this proof comes from an “official source” and shows that the individual had received all the necessary doses at least 14 days prior.

Travellers will be classed as being fully vaccinated if they have received a vaccine approved by the US Food and Drug Administration (FDA), or that has an Emergency Use Listing from the World Health Organisation (WHO), including Pfizer, AstraZeneca, Moderna and Janssen.

Airlines will also have to collect the contact information of their passengers for contact tracing purposes. This will be stored for 30 days.

Any unvaccinated travellers allowed into the country – such as US citizens – must take a Covid test in the day before they travel.

The US travel ban had included all countries in the Schengen zone, as well as the UK, China and India and others.

The Welsh and Scottish governments have announced that fully vaccinated travellers arriving from France and other non-red list countries will from this weekend be able to swap costly day two PCR tests for a cheaper lateral flow option.

This change will take place on Sunday (October 31), a week after the relaxation of day two testing rules in England on October 24.

When the UK government initially announced the switch to lateral flow tests, Scotland said that it would not follow suit as PCR tests are more reliable. However, Transport Secretary Michael Matheson later said that Scotland “intended to align with the UK post-arrival testing regime.”

Wales’ Health Minister Eluned Morgan has announced that the nation will “reluctantly” align with the new rules for England, despite concerns “about the UK government’s approach – and the speed at which it is opening up international travel.

“We are unable to introduce the changes at the same time as we have not received sufficient or timely information from the UK government on how these changes will operate in practice,” she added.

“This is not ideal.

“We have consistently urged the UK government to take a precautionary approach towards reopening international travel.

“However, it is difficult for us to adopt a different testing regime to that required by the UK government, as the majority of Welsh travellers enter the UK through ports and airports in England.”

Northern Ireland has not confirmed as yet whether it too will be following suit.

The latest update of France’s traffic light system for international travel has seen Moldova, Montenegro and Serbia added to the red list.

Iran has been downgraded to the amber list, into which Singapore and Brunei have also been moved from green.

Red list destinations are countries or territories where “an active circulation of the virus is observed, with the presence of variants of concern.”

The restrictions imposed on travellers to and from these countries are available to view on the French Interior Ministry website.

The firm will make available 7,500 tickets for:

DFDS said that this scheme aimed to give NHS staff a “well deserved” break after their work during the Covid pandemic.

The scheme comes as part of a partnership with Blue Light Tickets, which runs ballots for free event and activity tickets for NHS employees.

Those who get their hands on a free ticket will be able to travel at any time until December 2022.

Greenpeace is calling on the EU to ban European flights whose routes can also be completed in a train journey of less than six hours.

In a new report published today (October 27), Greenpeace stated that such a rail alternative exists for 34% of the 150 busiest air routes between EU countries.

This includes the three most travelled journeys in the EU – Paris-Toulouse, Paris-Nice and Athens-Thessaloniki.

A further 21 routes can be completed within four hours, including Amsterdam-Paris and Paris-Frankfurt.

Approximately one quarter of the routes which take more than six hours are served by direct night trains or take less than 12 hours.

Even for longer-distance trips such as Amsterdam-Madrid or Paris-Warsaw, it is possible to complete the journey within a day 84% of the time.

In its report, Greenpeace urges the EU to improve train services for citizens, stating that: “authorities could subsidise rail transport and encourage competition between operators, and on the other hand they could increase taxation on air transport.”

Flights covering less than 1,500km represent one quarter of Europe’s greenhouse gas emissions, according to Greenpeace.

Sarah Fayolle, the organisation’s transport specialist in France, added that: “When you travel from Paris to Amsterdam by plane, you create 10 times as much CO2 as you do by train.”

Haute-Garonne has announced that it will invest €631million in the development of a high-speed rail link (ligne à grande vitesse) between Bordeaux and Toulouse and Bordeaux and Dax.

On October 14, the Toulouse Métropole city region promised €616million to the Grand project Sud-Ouest (GPSO), which includes the Bordeaux-Toulouse line as well as a Bordeaux-Spain link.

The region of Occitanie then invested €1.3billion in the project.

However, Lot-et-Garonne and Pyrénées-Atlantiques have voted against participating in the funding of the GPSO.

Lot-et-Garonne officials deem the sum requested of them by the scheme to be too high, and claim that it would threaten their ability to invest in future projects.

The departments concerned will continue to negotiate with the national government to find a solution. However, an agreement will need to be reached before the end of the year to allow for the creation of an Établissement public local official fund, planned for March 2022.

The LGV Bordeaux-Toulouse line would make it possible to travel from Toulouse to Paris within three hours and ten minutes, one hour less than the current journey time.

This route – which was originally planned for 2024 but then put back to 2027 at the earliest – will need €7.5billion of funding to be completed.

Air France has restarted flights between Paris-Charles de Gaulle and the Seychelles after an 18-month hiatus.

Travellers will be able to depart for the capital Victoria on Mondays, Tuesdays, Thursdays, Fridays and Saturdays, the Air France website states.

Air France is currently the only airline which offers a direct link between Paris and Victoria.

The Seychelles had until recently been on France’s red list for travel, but has now been moved to orange.

French airlines call for the extension of government support

France’s airlines are hoping that the government will continue to support them as the Covid pandemic continues to impact their finances.

Air France’s Anne Rigail, Corsair’s Pascal de Izaguirre and Marc Rochet from Air Caraïbes and French Bee have come together to appeal for

Air traffic may have picked up since lockdown and travel restrictions were eased in Europe, but this August saw only 57% of the flights which took off in the same month in 2019.

With the end of the summer season, this figure dropped to 52% of the number of services which would normally run in September, due to a lack of business travellers.

Over the year as a whole, French airlines have seen just 35% of the revenues that they received in 2019. Long-haul flights have suffered especially, with only 8% of the number of flights which would normally depart for Algeria currently running.

France’s airlines are therefore asking for the government to extend its financial support package, to freeze the repayment of loans and to prevent a rise in airport taxes.

French airports are also continuing to feel the effects of the pandemic. Aéroports de Paris (ADP), which runs around twenty international airports, is seeing 39% of the passenger traffic it saw in 2019.

The company does not expect things to return to pre-pandemic levels until 2024-27, a date which would be pushed back further by the emergence of further infection waves or Covid mutations.