One town in southwest France still has vacancies for two GPs to join its health centre two years after the posts were first advertised - like many rural parts of France it faces difficulties in attracting GPs who want to relocate from other French areas.

The Communauté de Communes Portes Sud Périgord has now asked Connexion to help spread the word about the vacancies in Eymet, Dordogne, and, having struggled to fill the post, has decided to widen the 'search pool'.

They would therefore welcome aplications from doctors from English-speaking countries who also have good French to join the Eymet practice.

There are already two doctors, plus one who covers for holidays, but Marie Fossez, who is responsible for local planning, said the situation is now urgent.

“It is very difficult because nearly all the health centres in Dordogne are in competition with each other to attract at least one GP.

“We are open to offers. It could be a couple, any age, part-time or full-time who could work in our beautiful bastide town with pleasant living conditions and near to all services.

“The health centre has a dynamic medical team including a psychiatrist, nurses etc. Waiting lists are getting longer, and our present GPs are near retirement.

Lack of doctors in rural areas is a growing problem.

The Conseil national de l’Ordre des médecins says the number of GPs nationwide has gone down 7.3% since 2010, creating a shortage of nearly 6,500 doctors.

The organisation said the situation will get worse as the number of young doctors being trained will not meet the shortfall. A total 45% of GPs working in their own surgery are over 55. In 2017 there were 88,000 GPs. The Conseil de l’ordre estimates there will be just 77,000 by 2025.

Departments with the least number of doctors are often those with the greatest need.

Areas which already have poor access to other services such as schools, supermarkets, and good internet connections, are less likely to attract young doctors, but more likely to have an ageing population.

The government says it is introducing measures to improve the situation including grants for doctors to set up where there is most need, introduction of health centres and an increase in the use of télémédecine, where a patient can consult a doctor via a video link. 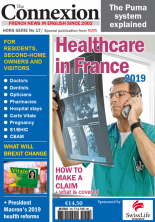