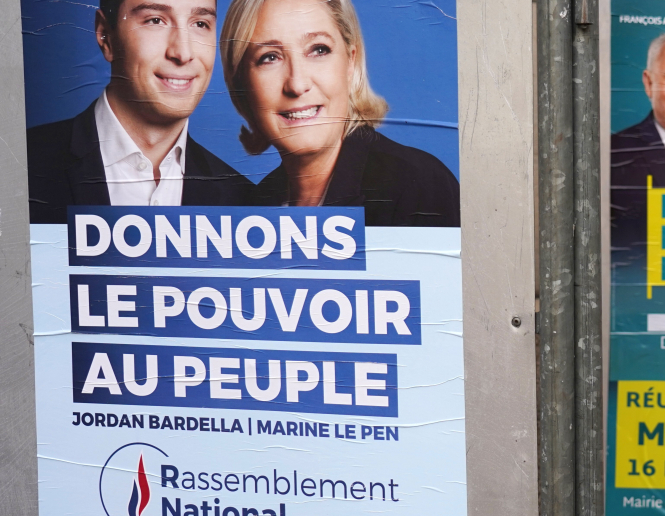 Marine Le Pen has handed control of the Rassemblement National to her number two, Jordan Bardella, as she launches her presidential 2022 campaign Pic: Guillaume Destombes / Shutterstock

Far-right French politician Marine Le Pen has launched her campaign for the presidential elections of 2022, calling herself the ‘candidate of the French people’ and insisting on the principle of ‘freedom’.

Ms Le Pen, who is the leader of extreme-right party Le Rassemblement National (RN, formerly le Front National), is taking a delicate position in the campaign.

She is both using her profile as former RN leader to advance her candidacy, but also appearing to distance herself slightly from the RN name and branding, preferring to appear as if she is an independent leader of the ‘French people’.

Ms Le Pen confirmed her campaign during an event in Fréjus (Var), yesterday (September 12), where around 900 supporters were in attendance.

Campaign posters have so far focused on ‘freedom’, with the slogan “Libertés, libertés chéries” inspired by a lyric from the French national anthem La Marseillaise.

In her speech, Ms Le Pen said: “Freedom is only an empty principle without spelling it with an ‘s’. That is why we have chosen this slogan. I will give you a state that will cherish your freedoms.”

Ms Le Pen continued: “In 2022, this election will not only be society’s choice. It will be a choice of civilisation, a choice of life and future for our children, a choice of security and power for our country, a choice of freedom and independence.

“Freedom is the fundamental pillar of France, and the first value of our civilisation.”

Ms Le Pen referred to the Covid health pass too, calling it “a disproportionate attack on freedom”. She said she was not anti-vaccination, but wanted “vaccine freedom”.

She said: “If Saturday after Saturday, thousands of people chant the word 'freedom', it is because there is a malaise that must be heard.”

Included in her campaign promises are “free trains” for students and young workers outside rush hour, and plans to “engrave” in the Constitution “the superiority of French law over international law”, and fight what she called the "dictatorship" of the European Union.

The candidate said that France was “out of control”, and added that she would also focus on her party’s key principles of immigration, and fighting against Islamic ‘proselytizing’.

She said: “We must decide who can come in, and under what conditions.”

Ms Le Pen has prepared a bill on immigration, which she is set to present at the beginning of October, and which will be submitted to a referendum if she is elected to the Elysée.

She also said she would be tough on crime, and sexual harassment, with plans to make street harassment a criminal, sexual offence. She said: "We will eradicate gangs, put French delinquents in prison, and foreigners on a plane.

“The pressure on young girls in certain neighbourhoods in our country today is deplorable. We will send these Taliban hiding in plain sight, home.”

But while the event in Fréjus used the traditional blue, white, red colours preferred by the RN, Ms Le Pen’s own marketing uses a green colour and does not make reference to the RN at all.

Ms Le Pen has officially handed the presidency of the RN to former vice-president Jordan Bardella, 26, in order to give herself time to lead the campaign. Mr Bardella is the partner of Marine Le Pen’s niece.

In a tweet, Mr Bardella said: “Marine Le Pen is a stateswoman and free. Free of any allegiance to hierarchies, who is not guided by any nostalgia, but by a project of national inspiration, turned towards the future; firm and realistic, politically and legally applicable.”