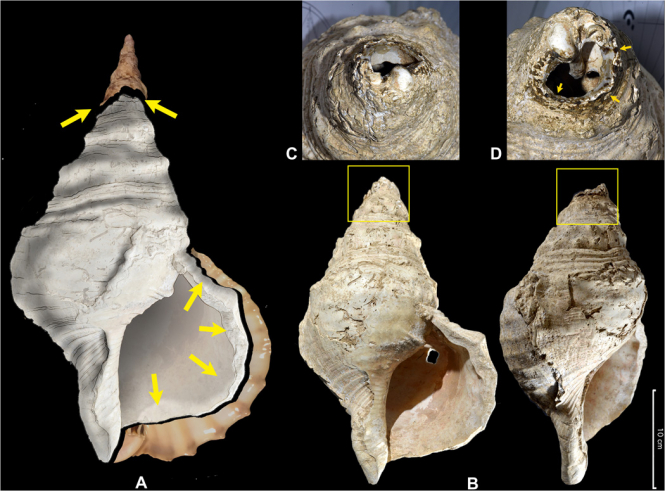 A 17,000-year-old conch shell, found in a cave in the French Pyrénées more than 80 years ago, is one of the oldest known instruments of its kind, experts have discovered.

Researchers said that the shell's prehistoric owners had modified it so it could be played like a horn. Their findings were published in the journal Science Advances.

It had been assumed that the shell was a communal 'loving cup' used by the Paleolithic tribe whose art decorates the cave in which it was found.

But researchers at the Natural History Museum of Toulouse noticed unusual holes in the shell. The tip of the shell was broken off, creating a hole large enough to blow through. Microscopic inspection revealed the opening was the result of deliberate craftsmanship.

It had also been decorated with red pigment similar to the fingerprint art on the cave's walls.

A skilled horn player produced three clear notes of C, D and C sharp from the artefact, offering a hint of how it sounded to its original owners.

“We suppose that the shell was decorated with the same pattern as was used in the cave art of Marsoulas, which establishes a strong link between the music played [on] the conch and the images on the walls,” said Gilles Tosello, an archaeologist and cave art specialist, who was part of the investigating team.

Marsoulas cave, where the instrument was found in 1931, is not near an ocean, so the prehistoric people must have either moved around widely or used trading networks to obtain the shell, researchers said.

4 days ago
3
French farmhouse renovation: DIY tricks to get rid of rats