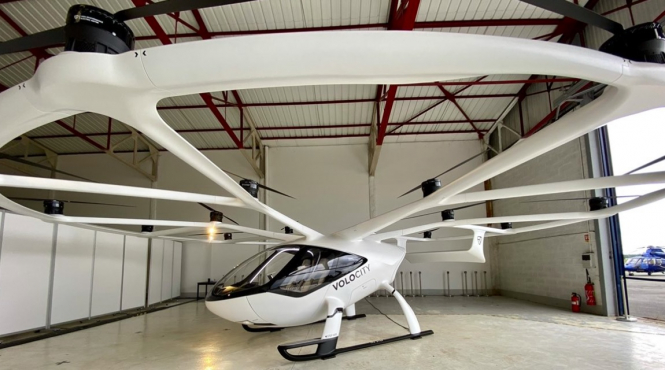 The VoloCity engine by Volocopter was tested at the Le Bourget airport this week Pic: Arnaud Tousch / @nanotousch / Twitter

The first test of a new electric flying taxi has been successfully completed in Paris with a view to having a full service in operation by the 2024 Paris Olympic Games.

The flight lasted three minutes and did not have any passengers on board. It travelled along a 500-metre route at speeds up to 30kph and at 30metres altitude, manufacturers said.

It can carry two passengers and has extra space for luggage.

Volocopter CEO Florian Reuter said the flying taxi service will first be operated by ‘drivers’ with a pilot’s licence, but it is expected that flights will be driverless in the future.

He told Reuters: "As far as regulation is concerned, initially we will have a fully certified and licensed helicopter pilot, just to fit in with the existing regulations.

“Over time, we want these vehicles to fly fully automated. So a pilot’s licence will not be needed.”

Mr Reuter said that the ‘urban mobility’ market was “gigantic”, and worth more than 10 billion US dollars (€8.4 billion).

Volocopter first unveiled its VoloCity machine in October 2020. At the time, it said that the machine would be able to fly at 400-500metre altitude and have a 35km range.

It is not yet clear how much each taxi ride would cost, and how loud the taxis would be when taking off and landing.

Read more: Flying taxis to be tested in Paris

Volocopter is not the only company exploring the introduction of flying taxis to Paris by the 2024 Games.

In 2020, French aviation giant Airbus launched its CityAirbus concept, which it said would offer ‘airborne links’ of 15 minutes between Roissy-Disneyland Paris, and Roissy-Saint-Denis, at speeds of up to 120kph.

It said that from 2030, it would aim to serve other economic and tourist centres in Ile-de-France, such as La Défense or Versailles.

A poll at the time found that the public in France appears relatively open to the idea of automated flying taxi travel: A study by Carvea Consulting and Opinea found that 43% of those polled were willing to board a pilotless drone taxi.

This increased to 51% among men, and was even stronger among younger people, at 54%.

3 hours ago
4
Coronavirus: Daily updates on the situation in France

3 hours ago
5
How will foreign visitors to France use the health pass for going out?