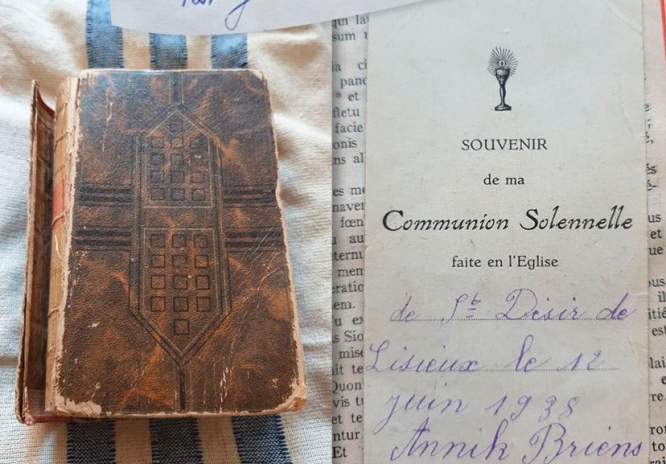 The bible was found by an English soldier, Jack Harrison, during his work for the ROAC in World War Two.
By Hannah Thompson

The Bible in question originally belonged to a young Normandy resident, but was lost during the war. It was found in an abandoned German truck by an English soldier named Jack Harrison, at Vaux-sur-Aure, in the Calvados, in 1944.

Jack Harrison served in the sixth Royal Army Ordnance Corps (ROAC), which travelled across France, Belgium and to Hamburg in Germany. The corps was charged with picking up equipment and abandoned material and objects from the battlefields. Jack found the Bible which was inscribed with the girl’s name Annick Briens. He kept it his entire life, bequeathing it in his legacy to his grandson Damian, upon his death in 2003.

Damian - who is a New Zealander working as a translator in Berlin - decided to try to find the family of the book’s original owner, and give it back to them. He had only one clue to start with: according to a record in the book, “Annick Briens” appeared to have taken communion at the Saint-Désir de Lisieux church on June 12, 1938.

With just this one detail, plus the name, Mr Harrison launched the appeal on Facebook, enlisting the help from memorial association, Mémorial de Caen, which was touched by the story.

Mathilde Rouquet, manager at Mémorial de Caen, told news source France 3: “We receive many requests of this kind, and most of the time we broadcast it on the [radio] Caen Service historique de la défense, (the archive division of victims of contemporary conflict). They have personal files of victims, but at the Mémorial, we only have scientific documents.

“But I found this story so enchanting that I published it on Facebook.”

Laura Bataille, digital communications manager at Mémorial de Caen, said: “We posted it on Thursday September 17, around 17:00. Within 20 minutes, we already had 1,200 shares. We saw that it had taken off. In less than 24 hours, we had 60,000 views and a huge amount of reactions.

“Many people joined us in the investigation. Within three hours, we had three serious leads.”

In a new post explaining the discovery, Mémorial de Caen wrote: The grand-nephew of Annick Briens contacted the memorial association, and recognised that it belonged to his great-aunt, Annick Louise Jeanne Briens, who was the second of four siblings.

She was born on July 17, 1927 in Calvados, and as the daughter of two Bretons, her name was often spelled both Annick and Annik. She married on May 7, 1960 in the same church where she had taken the communion dated in the Bible.

She had no children, and died in Lisieux aged 81, on October 15, 2008. The Bible has now been restored to her family.

President Macron to visit London in memory of wartime ‘call’