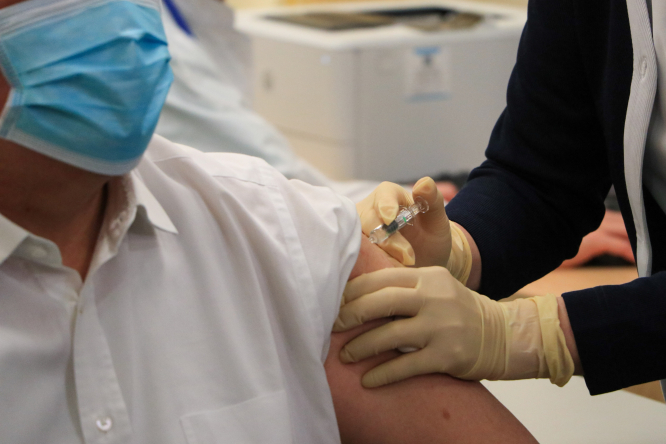 2.725 million AstraZeneca vaccines have been administered in France so far
By Hannah Thompson

Nine new cases of very rare and unexpected thrombosis, and four related deaths, in people who had the AstraZeneca Covid-19 vaccine have been reported in France for April 2-8. We explore the risk.

The cases were reported to the medicines safety agency ANSM, bringing the total number of cases of thrombosis and blood clotting issues in France to 23 (and eight deaths total). The latest figures were reported in the ANSM’s most recent press conference on April 16.

ANSM said that the cases were “worrying”, as the profile of affected patients is different from the other patients affected so far. Of the nine new reports, there were four women and five men, aged 54-74.

Until now, reports of clotting issues had mainly affected women aged under 55.

ANSM said: “The monitoring committee notes a change in the typology of reported cases with a higher age of patients, a sex ratio close to 1 [almost as many women as men], and a location of thrombosis mainly in the digestive tract over the period.”

It comes after 2.725 million AstraZeneca vaccines have been administered in France so far.

Of these 23 cases, 21 “are associated with cerebral venous thrombosis and/or digestive thrombosis, and two cases with isolated disseminated intravascular coagulation (DIC)”, ANSM said.

The new reports have been shared with the European Medicines Agency (EMA) as part of a wider European evaluation of these cases.

The agency also shared reports of two “signals” that are being watched “particularly” closely.

These include five new cases of facial paralysis out of a total of 15 cases identified since the start of the vaccination campaign, ANSM said. These people are currently recovering.

ANSM also said that these cases were due to neurological issues, with the latest report saying they were related to "acute polyradiculoneuritis (including Guillain-Barré syndrome)”. This condition is caused by autoimmune inflammation, which affects the motor nerves.

Due to reports of thrombosis risk, France has stopped giving the AstraZeneca vaccine to people aged under 55. For people under 55 who have already received their first dose, they are now being invited to have the Pfizer or Moderna vaccine for their second dose.

Risk same as ‘getting hit by lightning’

Professor Mathieu Molimard, head of pharmacology at the Bordeaux CHU hospital, told FranceInfo: “The risk is still very low, as it is around 1 in every 100,000 patients. That might seem like a lot, but the risk of getting hit by lightning and dying is around the same as that.

“We usually calculate risk by 1 in 10,000 [patients] with regular medicines.”

He said the risk of thrombosis could even have been overestimated.

He said: “There is what is called the notoriety bias, i.e. there has been so much talk about thrombosis, that any thrombosis that occurs now is reported to [side-effect reporting agency] pharmacovigilance, so there is increased reporting,”

Professor Renaud Piarroux, epidemiologist and head of parasitology at the Pitié-Salpêtrière hospital in Paris, said: “If we think about the link between the risk of thrombosis out of 100,000 vaccinations and the benefits, especially for those over 55, the benefit-risk ratio is still in favour of the vaccine.

“The risk, if we do not, is to delay vaccinated for at-risk patients, and expose them to death by Covid-19.”

A report in the British Medical Journal this week showed that the risk of getting cerebral blood clots from Covid-19 is 10 times higher than the risk from Covid-19 vaccination.

Europe-wide, there have been 169 cases of cerebral thrombosis and 53 cases of digestive thrombosis out of 34 million people vaccinated, according to the latest figures reported on European alert platform EudraVigilance, the EMA said.

French medical academy wants 6 months between Covid jabs for under 55s
All Covid vaccines now open to over-60s in France: Your FAQs
Eligible for a Covid jab in France but no slots open? Try these tips