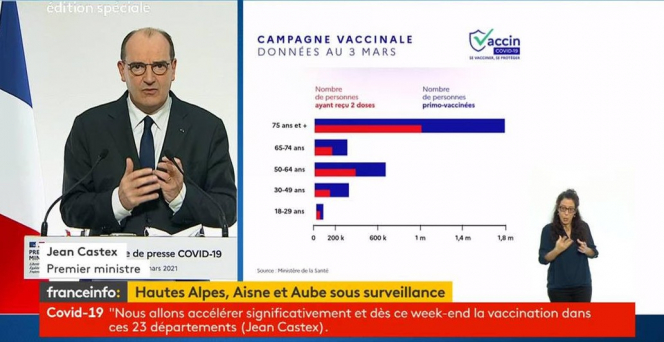 The Covid-19 vaccination campaign in France is going to accelerate, said French Prime Minister Jean Castex during a press conference on March 4.
By Connexion journalist

That equates to two-thirds of the adult population in the country.

“Deliveries of doses to France will increase in the coming weeks,” he said during a press conference.

“Between January and February, we received seven million doses of all vaccines. In March, we should receive 22 million doses, three times as many."

"We can't vaccinate everyone right away. You will still have to be patient but don't have any doubt -  you will be vaccinated,” he said.

He stated that 850,000 new Covid vaccination appointments will be made available between now and the end of March.

Currently 3.2 million people have received a first injection and more than 1.7 million have been vaccinated with two doses.

From March 15, pharmacists will be able to administer the AstraZeneca vaccine on site. There will be no need for a prescription. The first priority people for this will be those aged 50 and above who have existing health conditions which put them at risk of developing a serious form of Covid.

From mid-April people without such conditions will be able to get vaccinated too in pharmacies.

A decree authorising this measure will be published tomorrow (March 5) and there will be more details available from next week.

Mr Castex stressed the efficacy of the AstraZeneca vaccine, saying “the original reservations are no longer valid”.

France’s vaccination campaign has been criticised for being too slow. Mr Castex sought to counter that by stating that the country “is leading the way in Europe for the vaccination of those most vulnerable to the virus".

He called on everyone involved in the rollout to be prepared to pick up the pace.

“Mayors, healthcare workers, hospitals - everyone must be on hand, including on weekends, to vaccinate as quickly as possible.

“We have entered a race against time with the epidemic and we need everyone to pull together,” he said.

He also criticised the poor uptake in vaccinations among healthcare workers in France.

“Only one out of three healthcare workers is now vaccinated.

“This is not normal. It compromises our ability to fight the virus effectively."

“It is a huge challenge and yet we have reacted with great speed,” he said during a joint press conference with the Italian minister of economic development.

“I have great confidence in Europe’s ability to deliver vaccines faster and I believe that by the end of the summer we will be able to vaccinate all European citizens."

The French government has stated that its target is to have all willing adults vaccinated by the end of this summer.

*Note: This article originally stated (March 4) that Prime Minister Jean Castex did not say whether, when referring to the target of vaccinating 30million people by summer, he meant one or two vaccine doses. This article has now been updated (March 5) to say that he meant only the first dose.