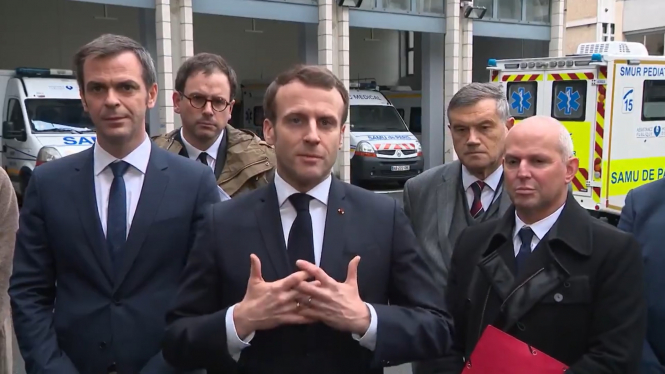 Director general of health, Jérôme Salomon, said: “The passing into stage three [of three] is expected to happen in the next few days.”

Stage three denotes a full-blown epidemic and is likely to mean more stringent restrictions will be put in place across France, including the closure of schools and workplaces, a reduction in public transport services, and the cancellation of most sporting or cultural events.

On Tuesday March 10, Mr Salomon confirmed that there had been 372 new confirmed cases in the past 24 hours - bringing the total diagnoses in France to 1,784 - and said that 33 people had died in France in total.

In a statement this week, President Emmanuel Macron said: “We are only at the beginning of this epidemic. We have anticipated it [and] we are prepared. I have seen incredible teams of professional, innovative and brave health workers. We are behind them for the long term.

“For each stage of the epidemic, we will adapt the response to bring the support that our citizens have a right to expect.”

Mr Macron was speaking outside the SAMU call centre at the Necker hospital in Paris.

All regions in metropolitan France are now affected by the virus.

How are the numbers calculated?

This data is kept on a database that can be accessed by regional health agencies les Agences Régionales de Santé (ARS), by Santé Publique France, and the ministry for health, the latter of which holds a press conference every evening to give updates on the situation.

Santé Publique France also publishes a daily update of the official figures on its site, which is refreshed every day at a fixed hour (either 15h or 16h).

Three main figures are announced at the press conference each day: the number of new cases that have tested positive for the virus; the number of cases deemed to be serious; and the number of deaths.

These three figures are continually being updated on the database.

A spokesperson for the ARS Ile-de-France explained to public news source FranceInfo: “In real time, we can see on our screen that someone has tested positive. We do not know their identity, because that data is protected. But we can see where they are being treated, and the referring doctor.”

On Monday March 9, there was confusion over the number of people who had died. Director general of health Mr Salomon had said the number was 25, but a later update from Santé Publique France had the number at 30.

Mr Salomon explained that this was not a mistake, and was simply due to the timing of the statements, and the speed at which the data is changing. He said: “There was a delay between the time we prepared the update, and the latest figures. But our sources are the same. There are not two lines of information.”

The number of deaths includes anyone who has Covid-19 who has died. The majority of people who died had pre-existing conditions (comorbidities) that were linked to their death.

Health authorities also collect figures on the number of people cured of the virus, but these are not always updated publicly in real time, said ARS Ile-de-France. They are released once authorities have been able to analyse them properly, Mr Salomon said.

Yet, the official figures may not show the whole picture.

It is not known for sure how many people have the virus in France, as some people may show few or no symptoms. Not everyone who presents symptoms, or calls the SAMU emergency number 15, is tested.

The ARS said: “There are about 300 to 500 calls in Ile-de-France. If the patient calling is showing genuine symptoms, the Samu will take over and take [the patient] to a testing centre.

“If they have coronavirus, they are either hospitalised - if necessary - or quarantined at home, with a kit of things they need, including masks and sanitiser gel. In most cases, they get better at home.”

Anyone whose symptoms do not appear to need testing are directed to their GP, invited to call the free telephone information line on 0800 130 000, or to consult the government information website on gouvernement.fr/info-coronavirus.