France doubles penalties for people who do not obey police orders 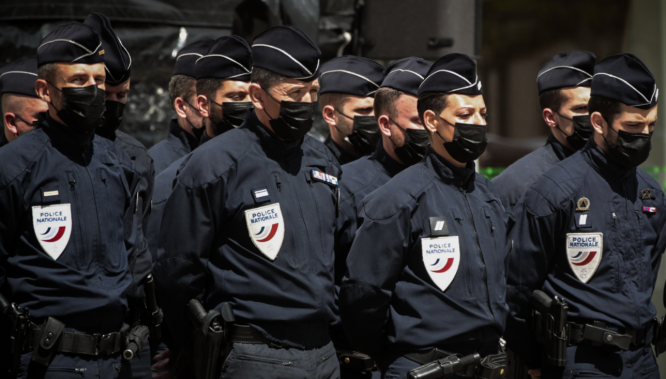 France is to toughen punishments for people who attack police officers or refuse to comply with police instructions, with sanctions set to double to two years’ jail time, fines of €15,000, and licence removal for drivers.

Prime Minister Jean Castex confirmed the move to France 2 and was speaking after the memorial held for police officer Eric Masson, who was killed on May 5 during an intervention near a drug trafficking site in Avignon.

Mr Masson’s death occurred less than two weeks after the murder of police station worker Stéphanie Monfermé, who was killed at the Rambouillet police station in Yvelines, by a radicalised Islamist.

Mr Castex spoke of the “state’s strong resolution to ensure that tragic events, such as that in Avignon, do not happen again”.

As a result, punishments for the refusal to comply with a police officer’s instructions are being increased.

Mr Castex said: “Today this is punished by a year in jail and a fine [of up to €7,500]. We are going to double these sanctions.”

He added that for incidents where cars are involved, perpetrators will automatically have their driving licences confiscated and their cars impounded. The latter will especially apply to perpetrators who are found to be driving without a licence.

Mr Castex said: “Among those who refuse to comply, it’s usually a driver at the wheel, who appears aggressive...and sometimes even committing extremely serious acts against the police.”

It comes after the government promised strong measures to respond to rising anger among police and gendarmerie.

Mr Castex also said: “We are working to create 15,000 prison spaces, in the next 5 years, as well as creating 10,000 new gendarmerie and police jobs.”

France has also increased the justice budget by 8% - equivalent to €10million - and increased the prison sentence for someone who kills a police officer to a mandatory 30 years, it was announced this week.

It comes as polls show that violent crime is a strong concern for voters ahead of next year's presidential election, in which Emmanuel Macron is expected to seek a second term.

The government is also aiming to increase the numbers of places in closed reeducation centres for minors, upgrade police equipment, and support police with more gendarmerie officers on the ground, the prime minister said.

Yet, police unions have said these changes are not enough.

Some had demanded more mandatory or minimum sentences for certain crimes, which were denied.

Fabien Vanhemelryck, from the Alliance union, said that without these, “nothing will change”. He said: “They replied that they would not be Constitutional. Well then, let’s review the Constitution!”

François Bersani, secretary of union Unité SGP Police (Yvelines), said: “For the moment, we feel that these measures are not what we had hoped for.”

Mr Dupond-Moretti is now set to publish a recommendation that prosecutors' offices take an especially firm stance when the police are attacked, by asking for the perpetrators to be systematically brought to court, and tried quickly.